The site of Nefertiti’s tomb, one of the longest-running archaeological mysteries, has left experts puzzling for centuries. But this week, a former British Museum curator argued that he may have found a clue that could eventually lead to its discovery.

Speaking to the Guardian, Nicholas Reeves, who formerly worked in that London institution’s Egyptian antiquities department, argued that Nefertiti may have buried in a hidden area near the burial chamber of her stepson Tutankhamun. His suggestion is still only just a theory, however, as radar scanning failed to prove it as the truth. 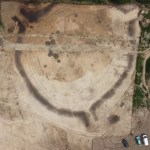 His theory rests on painted cartouches that appear on the walls of Tutankhamun’s tomb that show him being buried by Ay, the pharaoh after him. According to Reeves, these may have covered over similar images that show Tutankhamun burying Nefertiti.

If Reeves is correct, it could mean that Tutankhamun’s tomb is even bigger than Egyptologists have long thought it to be—and that they will be one step closer to finding Nefertiti’s burial place.

Reeves told the Guardian, “Far from Tutankhamun having been buried in the expanded, unused tomb of a private individual, it looks very much as if he was merely an interloper within the outer section of a significantly larger, queenly tomb … An unusual state of affairs this may seem, but in fact the arrangement is far from unique.”

Tutankhamun’s tomb, which is rich with antiquities and painted decorations, has long been the source of fascination among the general public. It was discovered in 1922 by Howard Carter, who, some recent research claims, almost definitely plundered from the tomb after exhuming it.

As the 100th anniversary of the find fast approaches, there has been heightened speculation about where Nefertiti’s body may lie. Zahi Hawass, a controversial archaeologist who was once Egypt’s former Minister of State for Antiquities Affairs, recently claimed that he had found Nefertiti’s mummy, along with another belonging to Ankhesenamun, Tutankhamun’s wife. He teased plans to reveal these mummies to the public in October.