Sylvie Patry, the Musée d’Orsay’s current deputy director for collections and curatorial affairs, is headed to the gallery world.

On Wednesday, Paris’s Kamel Mennour gallery announced that she will start as its artistic director in December. In her new position, she will be working closely with artists and collectors, and develop the curatorial program at Mennour.

At first glance, Patry is an odd choice for the role. A specialist in 19th-century art, in particular the Impressionist movement, Patry has taken on high roles at museums that focus on historical material, as opposed to contemporary work. Before her time at the Musée d’Orsay, she was the chief curator and deputy director for collections and exhibitions at the Barnes Foundation in Philadelphia. 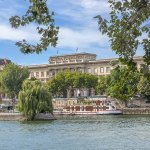 “Kamel knows my expertise, that I do not come from the MoMA or the Centre Pompidou,” said Patry in a phone call with ARTnews.

She and the dealer first began working together in 2014, when Patry was putting together an exhibition for the Orsay on the famed art dealer Paul Durand-Ruel, who had a large influence on the success of the Impressionist movement. She in whether Durand-Ruel had any influence on contemporary dealers, and so invited a number of them, including Kamel Mennour, to a roundtable on the subject.

By late 2015, she was off for her exceptional appointment at the Barnes in Philadelphia. Just before leaving Paris for her new city, she made a stop at Mennour’s gallery, where she came into contact with the work of the Algerian-born photographer Mohamed Bourouissa. When Patry discovered that Bourouissa had previously exhibited at the Philadelphia Museum of Art in 2011, she invited him to come back to Philadelphia and show at the Barnes.

“We began with the 19th century and continued with emerging artists,” she said.

The news comes as galleries turn their attention to Paris ahead of the first Art Basel edition there in October. Mennour’s coup of attracting an institutional leader is likely to set him apart from others seeking to further their reach in the French capital.

Many galleries have introduced institutional talent to their staff as a way of bolstering their cred, if not necessarily their sales. In 2013, Hauser & Wirth made waves when they brought on Paul Schimmel, chief curator of the Museum of Contemporary Art Los Angeles, who departed the gallery in 2017. After Schimmel’s appointment, these hires became increasingly common.

In 2015 Gagosian hired two previous MoMA curators, John Elderfield, the former chief curator of painting and sculpture, and Peter Galassi, the former chief photography curator. In 2017, Thaddaeus Ropac brought on Julia Peyton-Jones, the former director of London’s Serpentine Galleries. In 2019, Marian Goodman brought on museum veteran Philip Kaiser as executive director, and that same year Pace hired Andrea Hickey, who left her position as senior curator at the Museum of Contemporary Art Cleveland to start a curatorial department at Pace.