After 11 years at the helm, Claudia Gould, director of New York’s Jewish Museum, has announced that she will leave her post.

On Friday, she said she would depart as director in June of next year, at the end of her contract, marking the end of a tenure that began in 2011. Her next plans were not announced by the museum, whose board will now form a search committee for her replacement.

In a phone interview, Gould greeted her departure with a mix of pride and sadness. “We’ve had a lot of successes, and I really feel good about leaving the museum,” she said. “I’ve built an extraordinary team that wasn’t here when I came. When you make the decision to leave, it’s got to be on a high.” 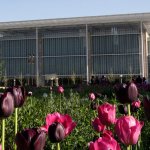 In Open Letters, Art Workers Demand That Institutions Do More to Fight Racism

Robert Pruzan, chair of the museum’s board, told ARTnews, “She and her team have done a tremendous job in really pushing the mission forward, broadening our audience and making us more relevant.

The past decade at the Jewish Museum has seen an array of notable exhibitions, including a 2017 Florine Stettheimer survey, the artist’s first in New York in more than 20 years, and the current exhibition “New York 1962–1964,” which was among the final projects organized by the late curator Germano Celant. These appeared alongside more offbeat programming, including a 2016 Isaac Mizrahi blockbuster and a 2019 show themed around the musician Leonard Cohen. There have also been major acquisitions, including one of 90 works from the Barnett and Annalee Newman Foundation that also came with a $10 million gift.

Prior to Gould’s arrival, the museum had been primarily historical in focus, and she worked to bolster its contemporary art program. She continued a series of commissions that included works by Chantal Joffe and Lawrence Weiner, and she recently hired Liz Munsell, formerly of the Museum of Fine Arts Boston, as the institution’s first curator of contemporary art.

Also among Gould’s significant hires was Darsie Alexander, who joined as chief curator in 2017.

The museum has also seen its fair share of controversies in the past decade. The most public-facing of them involved the celebrity curator Jens Hoffmann, who was fired in 2017 after the museum received allegations of sexual harassment and bullying. He denied the allegations against him.

And, in 2020, amid widespread protests following the murder of George Floyd, employees at the Jewish Museum signed a letter that called for greater transparency and said that almost the entire workforce there was white. The museum disputed the claim about its staff’s demographics, reporting that around a third of its workers were non-white, and said it was striving to be more diverse.

In a 2020 op-ed for the Jewish Telegraphic Agency, Gould wrote, “As an art museum striving to foster cultural understanding, and as a special touchstone for Jewish people of all backgrounds, we have a special role to play in standing against the scourges of white supremacy and anti-Semitism in our society and around the world. We aspire to live up to that role.”

When Gould first joined the Jewish Museum, it was something of a surprise, given that the person who had held the position before her, Joan Rosenbaum, was an expert on Jewish history. By contrast, Gould was a figure associated with the contemporary art world, having directed the Institute of Contemporary Art Philadelphia and Artists Space, and having been a curator at museums like the Wexner Center for the Arts and MoMA PS1.

“This was a very unexpected job for me to take,” she said in her phone interview. “I suspect my next job will be just as challenging, unexpected, and rewarding.”

And, she added, “museums shouldn’t be static.”