Union Members at the Philadelphia Museum of Art On Strike Indefinitely, as New DirectorStarts

Unionized staff at the Philadelphia Museum of Art voted overwhelmingly to strike Sunday and began an indefinite strike this Monday.

“We were able to clear non-economic issues off the table and that was really encouraging. We thought we’d wrap up the contract on Friday,” said Rizzo. “But when we got to the economic issues like pay and benefits, the Museum said, ‘We won’t budge on any of these things’ and that’s what led us tovote on the strike.” 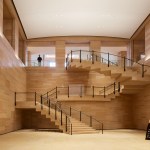 The strike comes at an awkward time for the Museum as their new director, Sasha Suda, began her first day on Monday.

“We were out here this morning setting up and they were hosting a coffee meet-and-greet for Sasha and senior management right inside,” said Rizzo. “That was disappointing.”

Rizzo, who serves as the museum’s coordinator of college and pre-professional programs, recalled meeting with Suda when her appointment had been confirmed this July and described her as a “lovely person.”

“She comes from a union staff, she said to me that she was proud of the work that the union was doing and I was really hopeful it could mean some change,” said Rizzo. “And maybe it still could.”

A representative for the museum said that Suda would not provide a comment for this article.

Suda’s appointment comes after former director Timothy Rub stepped down in July last year. Rub had been the subject of extensive criticism after the New York Times reported in 2020 that then-assistant director Joshua Helmer had been accused of inappropriate behavior towards female staff starting in 2016. Helmer quietly resigned in 2018 and then joined the Erie Art Museum, where, according to the Times, he was accused of similar behavior. Rub apologized to staff for the PMA’s handling of the situation shortly after the Times expose published, but did not reference the issue in his resignation last year.

Rizzo said that the issue with Helmer had been a major factor in the staff’s decision to unionize, along with their problems with James A. Cincotta, the Museum’s previous director of retail. The Philadelphia Inquirer’s published an investigation in February 2020 — one month after the Helmer story broke — alleging that Cincotta slapped, punched, pinched, and shoved numerous colleagues.

In an interview with the Ottawa Citizen Leslie Anne Miller, chair of the Philadelphia museum said that she hoped Suda’s gender would be seen as “emblematic of the institution’s ongoing commitment of furthering D.E.I. [diversity, equity and inclusion] in everything we do.”

Meanwhile, the negotiations with the union have dragged on for two years. The PMA said it believes it offered a satisfactory contract.

“The museum respects the right of employees to organize and go on strike but is disappointed that the union decided to strike despite the significant wage increases and other offers made by the museum at the last negotiating session,” the PMA said in a press release Monday.

The PMA provided a list of points that they had offered the Union: wage increases totaling 8.5% over the next 10 months and 11% by July 1, 2024; minimum annual salary for exempt employees that is more than 10% higher than the current lowest annual salary for these employees; four weeks of paid parental leave; accelerated eligibility for health benefits for new hourly employees; accelerated vacation accrual for hourly employees; a more flexible remote work schedule; and job security protections that ensure the museum will not use a temporary employee, term employee, subcontractor, or volunteer to lay off or furlough a current union staff member.

Rizzo said that he was happy the museum had extended, for example, healthcare eligibility, but that the overall offer was not enough. The union, he said, is seeking higher quality, affordable healthcare for the staff, and that the offered wage increases hardly make up for inflation, especially considering that the staff hasn’t received raises in three years. He added that, in negotiations, the PMA has never said it cannot afford the union’s higher demands.

“If they told us they couldn’t afford to meet our demands, legally, they would have to open their books to us and they’ve never done that,” said Rizzo.

Meanwhile, the union said that while PMA staff salaries are 30-60% of the industry standard, depending on the position, senior management earns well above industry standards for its roles. For example, said Rizzo, PMA’s Chief Operating Officer makes $400,000 per year. According to the Association of Art Museum Directors’s 2022 Salary Survey, the median salary for that role in the Mid-Atlantic region is just over $229,000.

Despite the difficult situation, Rizzo said that the atmosphere at the strike is lively and that they’ve been touched by the support they’ve been receiving.

“It’s super funto be out here with our colleagues, music and tambourines, talking to the community,” he said. “Obviously we’d much rather be inside doing our jobs.”