Collectors Sherry and Joel Mallin are selling around 1,000 artworks they’ve bought over the decades. Their holdings will be sold starting later this year at Sotheby’s, where they are expected to fetch a collective sum in excess of $50 million.

The Mallins’ works will be sold across a series of auctions that will take place in London and New York this year. Additional sales, including one devoted tolarge-scale sculptures, will be held in 2023, Sotheby’s said. 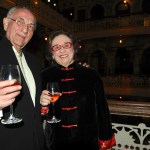 The move follows the couple’s recent decision to list their $8.5 million BuckhornSculpture Park,located at Pound Ridge in New York, on the market. The estate has long served as a private exhibition space for their collection, which they accumulated over the course of several decades.

The Mallins,who from 2004 to 2014 ranked on the ARTnews Top 200 Collectors list, tapped former auction executive Francis Outred to advise on the distribution of the pair’s art holdings. Christie’s also competed for their collection.

The first group of works are scheduled to be sold during contemporary art sales at Sotheby’s in London this month. Highlights include Thomas Schütte’s2002 sculpture Bronzefrau Nr.11 (Bronze Woman No. 11), which is expected to sell for £2 million–£3 million($2.3 million–$3.4 million). It will be offered during a live sale on on October 14.

Other top lots include a Yayoi KusamaInfinity Netpainting from 2010, Sean Scully’s 1998 painting Wall of Light Red,and Louise Bourgeois’s 1981 sculptureListening One. Those works will be offered at estimates ranging between £1.1 million and £2.5 million ($1.2 million and $2.8 million). A collection of works by figures like Damien Hirst and Ron Mueck will also be sold.