Pace Gallery, one of the world’s biggest galleries, with nine locations worldwide, has added famed filmmaker and artist David Lynch to its roster. Through the arrangement, Lynch will have New York gallery representation for the first time ever in his career.

The gallery’s first exhibition with Lynch, intriguingly titled “Big Bongo Night,” will open in New York this November. It will coincide with an exhibition of Lynch’s works on paper further downtown, at Sperone Westwater gallery. In addition to paintings, the Pace show will feature mixed-media lamp sculptures. 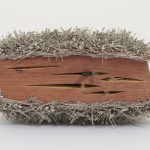 “David has made an indelible mark on visual culture over the past five decades,” said Pace president and CEO Marc Glimcher in a statement.

“I am really happy to be at the Pace Gallery,” Lynch said in a statement. “Marc Glimcher came to my house and we had a great talk and some pretty damn good coffee. I told him I would try to do some good work for his gallery. I think he smiled and said, ‘You fuckin’ better!!!’”

Lynch is best known for surreal films like Blue Velvet (1986) and Mulholland Drive (2001), as well as for the TV series Twin Peaks (1990–91). His representation with Pace comes amid a heightened awareness of his art, which has often taken the form of paintings that invoke nightmarish visions set in domestic spaces, much in the same way his films do.

In fact, Lynch was trained as an artist before he even made his first feature film, Eraserhead. He attended the Pennsylvania Academy of Fine Art during the ’60s and went on to produce installations and paintings that foreshadowed the dream-like imagery of his narrative features. His earliest works feature vomiting figures and Francis Bacon–inspired tableaux. None of that is mentioned in the official biography supplied by Lynch for the Pace announcement, which simply reads, “Eagle Scout.”

More recently, there have been attempts to bring to light this aspect of Lynch’s output, which has often gone under-recognized, even though it once caught the attention of the famed New York dealer Leo Castelli. His art was the subject of a 2014 retrospective at the Pennsylvania Academy of Fine Art and a 2016 documentary that was released theatrically.

Asked in 2018 how it felt to have his artistic career finally acknowledged more widely, Lynch told ARTnews, “It’s OK! But it’s just been recently OK, because they don’t really take painters seriously if you’re known for something else. You’re supposed to only do one thing, right? But now things have changed.”

Lynch had formerly been represented by Los Angeles’s Kayne Griffin gallery, which shuttered when it merged with Pace earlier this year. He’s also had exhibitions with Sperone Westwater and Jack Tilton Gallery.

Lynch is the latest in a rapid succession of artists that Pace has taken on in the past few months. Others include Acaye Kerunen, who appeared in this year’s Ugandan Pavilion at the Venice Biennale; Gideon Appah, a young Ghanaian painter; and Matthew Day Jackson, who left Hauser & Wirth to join Pace.