Peter Hort, a lawyer and collector who became close with a range of artists and other figures in the New York art world, died at 51 on Monday.

The Rema Hort Mann Foundation, a grant-making organization formed in memory of his late sister, announced Hort’s death on social media on Tuesday. The foundation said that he had been battling bile duct cancer.

Hort was the son of Susan and Michael Hort, a collecting couple that formerly ranked on ARTnews’s Top 200 Collectors list. Peter was a collector in his own right, too, and he focused his holdings on work by young emerging artists, whose pieces, he said, were priced at a point that he could afford. 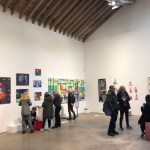 'It's a Little Liberating': After Cancellation of Volta, Dealers Optimistically Sell Their Wares at Plan B

In Wake of Volta Cancellation, Exhibitors to Show Work at David Zwirner, Art on Paper

“The artist who is hot today, who may or may not be hot tomorrow, isn’t necessarily what I am interested in,” he told Artspace in a 2014 interview.

Born in 1971, Hort recalled in the Artspace interview that, as a teenager, when his friends were getting computers, he was receiving works by the likes of Tim Rollins and K.O.S. from his parents. The collecting bug stuck, and in the years afterward, he would acquire works by Keltie Ferris, Jeanette Mundt, Jon Pestoni, Sara Greenberger Rafferty, Cynthia Daignault, Ella Kruglyanskaya, and more.

Many of the artists Hort collected had in some way received funding from the Rema Hort Mann Foundation, which provides grants to young artists and cancer patients.

Yet Hort’s connections in the art world extended beyond his collecting. In 2016, he formed a business called RISBE, whose focus was ensuring that artists would receive payment from galleries. As the Art Newspaper described it in a piece announcing RISBE’s formation, “the money from a sale goes through a third party, RISBE, which holds it in escrow before releasing a share to both parties—the gallery and the artist or consignor—once the cheque clears. RISBE takes a maximum of 2% from each transaction.”

Hort also acted as a savior to younger galleries when, in 2019, he hosted an impromptu New York fair meant to replace Volta, which that year was canceled after the pier where it was traditionally held was found to be unsafe. Titled Plan B, the fair was staged at two Chelsea locations, one of which was David Zwirner gallery; former Volta exhibitors paid a significantly lower fee to show at them. Hort organized the event with dealers David Zwirner and Quang Bao.

Hort also made some forays into the political arena, unsuccessfully running for Congress in 2004.

But his heart, as he told Whitehot Magazine in 2013, was in neither politics nor law but art. “I’m living a dream,” he said. “I am in a unique position in the art market, and have been called a princeling. But we’re enjoying it nonetheless and we are taking advantage of it.”