International leaders, as well as the United Nations, has condemned the attacks, which continued Tuesday and mark one of the deadliest offenses in Russia’s eight-month assault of Ukraine.

Russian President Vladimir Putin ordered the strikes after Ukrainians blasted the Kerch Strait Bridge, dropping parts of the 12-mile span that linked Russia to Crimea into the water. Russia annexedthe Black Sea Peninsula—a crucial supply route—from Ukraine in 2014, and Putin personally inaugurated the bridge in 2018. On Sunday, Putin called the explosion “a terrorist act” plotted by the Ukrainian government. 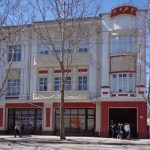 In a Facebook post Monday, Tkachenko reported that “civilians and critical infrastructure facilities,” had been attacked by Russia, including “cultural and educational institutions, bridges and parks.”Tkachenko listed theTaras Shevchenko Kyiv National University, the National Philharmonic, and the Museum of the Ukrainian Revolution of 1917-21 among the institutions targeted by Russian forces.

He said that windows were shattered in theKyiv Art Gallery, the National Research and Restoration Center, the Memorial Museum-apartment of Mykola Bazhan and Pavel Tychyna, the National Natural Science Museum of the National Academy of Sciences of Ukraine, and the Museum of the History of the City of Kyiv. Residential buildings, which he described as “architectural monuments of the 19th century,” also suffered damaged.

In avideo addressto the nationMonday night,Ukrainian President Volodymyr Zelensky promised that the country “will restore all objects that were damaged by today’s attack by Russian terrorists,” and accused Russia of targeting locations that symbolized the Ukrainian identity.

“The crossroads in Kyiv where I stand. The crossroads of Volodymyrska Street and Shevchenko Boulevard. That’s the target,” Zelensky said. “And right behind me there is a playground in Shevchenko Park, which also became a target for a Russian missile. But it is not just in Shevchenko Park. It is on one of the main museum streets of Kyiv. In particular, the Khanenko Art Museum was damaged by this attack by terrorists.”

Tkachenko wrote in his Facebook post that Ukrainians tried “to minimize the negative consequences of the damage” and that the country is “working on attracting international funds and aid to overcome the consequences of shelling.”

Russia’s invasion of Ukraine, which began in February, has been followed by reports of the looting anddestruction of heritage sites, religious buildings, and museums.UNESCO has partnered with the Ukrainian cultural sector to save cultural artifacts, all of which areunder the protection of the Hague Convention of 1954 that both Russia and Ukraine signed.

“Any violation of these norms will see the perpetrators brought to international responsibility,” Audrey Azoulay, UNESCO’s director general, said in April.