This week, the U.S. Supreme Court took up the issue of copyright and fair use for the first time since 1994, when the hip-hop group 2 Live Crew defended themselves against representatives for the late singer Roy Orbison.

For nearly two hours, lawyers for the Andy Warhol Foundation, rock photographer Lynn Goldsmith, and the U.S. Government fielded intense, free-flowing questioning about the copyrights of a series of paintings Warhol made of Prince based on a portrait Goldsmith took of the late musician. By the end, not only was the outcome uncertain; it wasn’t even clear what is at stake. 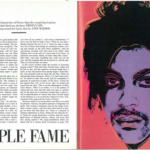 Curatorial Duo Behind 2022 Lyon Biennale Discuss Organizing Their Exhibition: 'This Is a Manifesto. This Is the Only Way Forward'

By the end, it seemed equally possible that the justices controlling a radicalized, conservative court will decide to parse an issue of magazine photo licensing, or that they will blow up the core of Warhol’s creative achievements and take huge swaths of content culture with it.

At issue, ostensibly, is the nature of the “transformation” required for an artist’s work to be considered new and original if it incorporates someone else’s copyrighted material. Copyright law includes a multi-factor test for deciding whether such a use is fair, or whether it infringes on the rights of the original creator. The arguments over Warhol’s Prince paintings touched on their character as unique paintings based on a recognizable photo, their use as magazine illustrations, and whether their distinct “meaning or message” should even matter when judges evaluate these conflicts.

In 1984, Andy Warhol was asked to make a purple portrait of Prince for a profile of the singer in Vanity Fair. The magazine licensed Goldsmith’s photo from her agency for use as “reference material,” and she received a fee and credit in print. Warhol made 16 paintings for the project, all of them silkscreened or hand-drawn variations of a tight crop of Goldsmith’s photo in a variety of colors. He kept these resulting paintings until his death.

The Andy Warhol Foundation, which inherited the artist’s copyrights as well as his remaining artworks, sold 12 of the paintings and gave 4 to the Warhol Museum. In 2016, after Prince’s death, Vanity Fair licensed a different painting from the series, an orange one, for the cover of a special commemorative magazine. Goldsmith saw it, recognized her photo as the source, and sought compensation from the Warhol Foundation and control over the paintings’ reproduction.

In 2017, the foundation sued to obtain an affirmative determination of Warhol’s copyright, and won. Then, in 2021, Goldsmith won the appeal before the Second District Court in New York, the same court that in 2009 had recognized Richard Prince’s fair use in his “Canal Zone” paintings of Patrick Cariou’s Rastafarian photos. The stewards of Warhol’s work then appealed to the Supreme Court.

[How the Supreme Court’s Warhol case could permanently alter freedom of expression.]

In Washington, D.C., on Wednesday morning, energetic justices asked the foundation’s lawyer, Latham & Watkins litigator Roman Martinez, whether “meaning or message” fits into the fair use test’s examination of “purpose and character,” adds to it, or replaces it.

“Wasn’t the purpose of this particular use to illustrate the Vanity Fair article?” asked Justice Ketanji Brown Jackson.

“That was part of the purpose, if you look at it at a higher level of generality. We’re not saying that’s irrelevant,” Martinez replied. “But I think even when you look at the actual article it was illustrating, it was illustrating an article entitled ‘Purple Fame’ that was all about Prince’s, like, emerging celebrity iconic status.

“And so,” Martinez continued, “it’s perfectly natural to illustrate that article that you would want a Warhol-type work that has as its meaning or message a picture of Prince that shows him as the exemplar of sort of the dehumanizing effects of celebrity culture in America…. A new meaning or message necessarily changes the purpose of the original work.”

Justice Samuel Alito asked if courts needed artists’ or critics’ testimony to analyze the meaning of artworks. He wondered aloud, “If you called Andy Warhol as a witness, what would he say was the purpose of his–and the message or meaning of his creation?”

“I wish I could answer that question,” Martinez said. “He’s not with us, as you know, Your Honor.”

“I know that,” Alito tersely responded.

Chief Justice John Roberts proposed a hypothetical scenario about an artist “whose work consists of a single color within a frame,” such as Mondrian or Albers. Would changing the color from blue to yellow change the meaning, and if so, he asked, “would that satisfy any claim of copyright violation?”

“I don’t think you can copyright a color,” Martinez replied. Then, trying to stay on message, he added, “I think…you would have to look whether there’s, in fact, a new meaning or message.”

The courtroom erupted in repeated laughter when Justice Clarence Thomas, relaxed and leaning back in his chair like he owned the place, spun his hypothetical. Would Martinez sue, he asked, if Thomas, a self-proclaimed Syracuse fan, made “a big blowup poster of Orange Prince,” the Warhol painting at the center of the lawsuit; added “Go Orange” to the bottom; and started waving it at football games? Martinez was only partially successful in working a serious response into the deferential praise for Thomas’s wit and creativity, which the Court apparently requires of those seeking its favor.

Throughout the hearing, but especially during questioning of Goldsmith’s attorney, Lisa S. Blatt, of Williams Connolly, arguments repeatedly turned to derivative works, new creations like sequels or adaptations, which are explicitly reserved by law for the original copyright holder.

These examples included spin-off TV shows from the 1970s (follow-ups to series like Happy Days), movies made from books (the “Lord of the Rings” series, The Shining), and cover versions of songs. All are long-established models that normalize monetization and control, potentially at the expense of free expression.

The possible impact of changes to derivative and fair use laws are broad enough that concerned parties flooded the Court with amicus briefs. A few critics, artists, and curators, including Richard Meyer, Barbara Kruger, and Rob Storr, supported the Warhol Foundation’s case, while the Intellectual Property Industrial Complex, their trade associations, and their lawyers warned they face “an existential threat” from any fair use decision loose enough to accommodate Andy Warhol’s practice.

Justice Brett Kavanaugh asked each of the attorneys in turn about Warhol’s “need” to use Goldsmith’s photo of Prince vs. any other headshot. This question of necessity was floated in briefs by Blatt, and picked up by the U.S. Government’s attorney, Yaira Dubin. Though it obviates the fact that Warhol used Goldsmith’s image because it was licensed by and provided to him by Vanity Fair, it suggests a test the Court could craft to limit fair use.

Alongside the four factors of the fair use statute, artists could be required to justify their need to use a specific piece of copyrighted material. Toward the end of the hearing, Kavanaugh, with other justices joining in, prodded Dubin to pin down the Government’s suggested language, as if a decision were already in the works. The proposed standard they landed on was “essential, necessary, or at least useful.”

The hearing ended with a rebuttal by Martinez, who warned the justices that the decision before them was not just about whether Warhol’s painting unfairly displaced Goldsmith’s photo from a supermarket magazine cover. If Goldsmith is awarded copyright of Warhol’s Prince series, he argued, museums, galleries, and collectors will be liable for infringement if they show or sell the works, or any works with appropriated elements in dispute. Such a decision would have a suppressive effect, not only on the worlds of postwar and contemporary art, but on the many spheres of digital and social media that have been constructed on the existing legal framework for creating and reusing content. The challenge, of course, is that the case is now in the hands of a radical Supreme Court which has shown little restraint in sweeping aside precedent and history if it has an ideological solution it wants to impose. When faced with a court where Clarence Thomas is the Comedian and Brett Kavanaugh is the Reasonable One, it is hard to know what to expect.