Billy Al Bengston, a painter whose unclassifiable semi-abstractions made him a core figure of Los Angeles’s postwar art scene, died at 88 of natural causes on Saturday at his home in Venice, California. A representative for his gallery, Various Small Fires, confirmed his passing.

Last year, CBS News reported that Bengston had “a moderate case of dementia.”

Bengston rose to fame in L.A. during the ’60s, when he was painting works that abstracted commercial logos and car parts. His paintings’ spare compositions and their untraditional processes caused some critics to lump Bengston in with the Finish Fetish movement, whose practitioners made a habit of creating sleek, smooth artworks. 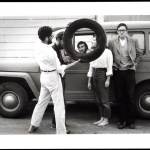 From the Archives: A Brief History of Walter Hopps and Edward Kienholz's Trailblazing Ferus Gallery

Some have also claimed Bengston as an artist adjacent to the Pop art movement because certain painting series allude to consumer goods.

During the era, Bengston showed at the vaunted Ferus Gallery, which became known for its offbeat and influential exhibitions. Founded in 1957 by Walter Hopps, his wife Shirley, and artist Edward Kienholz, the gallery also showed Bengston’s friends Larry Bell and Ed Ruscha.

With its emphasis on motorcycle culture, Bengston’s art was considered emblematic of a certain milieu. “A quality of the expansiveness of the physical environment as well as some of the brittle gloss and gaudiness of the aggressively manmade Los Angeles environment is acutely condensed in his work,” critic John Coplans wrote in Artforum in 1965. “This, perhaps, is one of the factors that makes placing him in some relation to current art most difficult, for he looks nowhere else for the authority of his art—a condition somewhat rare in contemporary American painting at the moment.”

Bengston was born in Dodge City, Kansas, in 1934. His father was a tailor, and his mother was a musician. The family had initially been lured to California when his mother got a job performing at a San Francisco opera house. They eventually moved back to Kansas, and then relocated to California once more, this time to Los Angeles.

He was drawn to art when he attended the Manual Arts High School, a vocational school whose alumni included Jackson Pollock and Philip Guston. He had been intrigued by the prospect of seeing nude models in his art classes. “I was pretty excited about this, until it happened,” he told Hyperallergic. “They were some of the ugliest people you’ve ever seen.”

After high school came what Artforum once called a “series of misadventures in higher education.” He went to college for three weeks, then got a job in a department store. He picked up surfing, which became a lifelong passion, and met the artist Ken Price, who would become an important sculptor and a friend to Bengston. They both ended up studying with Peter Voulkos, whose ceramics received acclaim.

Bengston went to Los Angeles City College for two years and then to the California College of Arts and Crafts after that. At the latter school, he studied with Richard Diebenkorn and Saburo Hasegawa.

Bengston’s paintings of the early ’60s often feature a single object or image at their center surrounded by abstraction. Paintings from the “B.S.A. Motorcycle” series depict carburetors, the BSA logo, and exhaust pipes amid fields of off-white. Both supremely odd and oddly striking, these works build on the innovations of Jasper Johns, who less than a decade earlier had imported the everyday—American flags, maps of the U.S.—into painting. Bengston had encountered Johns’s work in 1958, the year Johns showed in the U.S. Pavilion at the Venice Biennale.

The “Valentine” series, named because it debuted at Ferus on Valentine’s Day, has hearts at its center, and the “Chevron” series has bent and arced forms that are set against toxically colored backgrounds. The latter series appeared in New York at Martha Jackson Gallery and gained Bengston fame.

By the mid-’60s, Bengston had begun to incorporate lacquer and enamel, which he used to make his surfaces shiny, even somewhat reflective. This made the paintings like motorcycles themselves, an effect he underlined by denting some of his paintings using a hammer.

In 1968, Bengston had a Los Angeles County Museum of Art retrospective—one of two that he would have there during the course of his career. (The 1968 one was designed by architect Frank Gehry, who was then getting his start.) By the time of Bengston’s next one, in 1988, the Los Angeles Times reported that he was the richest artist in Venice, California.

“I’m ready to quit show biz,” Bengston told the Times back then. He didn’t stop working, however. Many of his later works would be variations on themes set out during the ’60s.

In 2011, for example, for a show at the Palazzo Dagli Scrigni in Venice that tied in with that year’s Biennale, Bengston painted gondolas with colors that alluded to Italian motorcycling brands. The project, he said, was an homage to MotoGP division motorcycle racing.

At the time of his death, Bengston was married to Wendy Al Bengston. He had also had a residence in Honolulu.

Bengston’s art has since been historicized, figuring in exhibitions like “Crosscurrents in L.A., Paintings and Sculpture 1950-1970,” which opened in 2011 at the Getty Center as part of the first Pacific Standard Time initiative. He always talked about his work in plainspoken terms, however.

“When I painted these motorcycle paintings, I pissed people off beyond belief,” he told Hyperallergic, speaking of what is now one of his most beloved series. “I don’t know why. They are just paintings. You don’t have to look at them. Whenever I get in trouble, I quote Ken [Price]. He said, ‘The only thing you have to do to outrage people isanything.’”