HIDING IN PLAIN SIGHT.In a tough break for fans ofJohannes Vermeer, theNational Gallery of Artsaid on Friday that, after high-tech study, it has determined that its paintingGirl With a Flute(ca. 1669/1675) isnot the workof the 17th-century Dutchman, as it had previously believed,Zachary Smallreports in theNew York Times. While closed during the pandemic, the Washington, D.C., institution examined the portrait using “microscopic pigment analysis and advanced imaging technology,” per theTimes, as part of a Vermeer exhibition (recently previewed byARTnews) that just opened. The work’s maker may have been someone close to Vermeer, the NGA’sMarjorie E. Wiesemantold theTimes, but even if their identity is unknown, criticPhilip Kennicottargues in theWashington Post, thatdoes not make it a bad painting. There may be “as many great paintings and sculptures with no attribution as there are great works firmly attributed to known artists,” he writes. 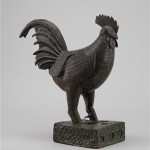 GRACE GLUECK,the pioneering art journalist and critic at theNew York Times, hasdied at 96, the paper reports. Glueck began her tenure at theTimesin 1951, and in the 1960s began writing a column called “Art People” that reported on at the art world up close, making the fast-growing industry a dedicated beat at the publication for the first time. “She was not afraid to speak her mind or report the truth,” art patronAgnes Gundtold the Times. She brought that approach to bear on her employer, when she became part of a class-action lawsuit in 1974 that accused it of gender discrimination. In a 1978 settlement, the organization agreed to hire more women for jobs at a variety of levels. Glueck also had a run as a critic, and wroteNew York: The Painted City, a 1992 volume that looks at how artists have depicted the city whose creative scene she spent decades documenting.

Billy Al Bengston, “a painter whose unclassifiable semi-abstractions made him a core figure of Los Angeles’s postwar art scene,” died on Saturday of natural causes,Alex Greenbergerreports. He was 88.[ARTnews]

Silke Otto-Knapp, who made spare, bewitching landscapes and portraits by applying layers of watercolor to canvas, died at 52, following a battle with ovarian cancer.[ARTnews]

A fire on Easter Island, reportedly sparked by itsRano Rarakuvolcano, has caused damage to its famed stone-carved Moai statues that is“irreparable,” according to an official who leads theRapa Nui National Park, which includes the objects.[CNN]

As the labor strike continues at thePhiladelphia Museum of Art, a museum spokesperson said that it plans to open a highly anticipatedHenri Matisseshow “on schedule,” on October 20.[The Philadelphia Inquirer]

An 11.15-carat pink diamond sold atSotheby’sin Hong Kong for the equivalent of about $49.9 million, a per-carat record for a diamond on the block and more than twice its $21 million estimate. The result proves “the resilience of top diamonds in a shaky economy,” diamond expertTobias Kormindsaid.[The Associated Press/Bloomberg]

DUE DILIGENCE.In theNew York Times, journalistSam Robertsmarked what would have been the 141st birthday, on Saturday, ofVincenzo Peruggia, who stole theMona Lisafrom theLouvrein 1911, witha rollicking recounting of that strange story. One highlight: The head of France’s national museums,Jean Théophile Homolle, was on vacation at the time and refused to believe the painting had actually been taken, figuring that it must have somehow been misplaced. (Which also seems bad.) “You might as well pretend that one could steal the towers ofNotre Dame,” he reportedly said. He was let go, Peruggia was eventually arrested in Italy, and the painting was of course recovered and returned to the Louvre.[NYT]