Freddy Rodríguez, Painter Who Highlighted Racial Inequities in the U.S., Dies at77

Freddy Rodríguez, a New York–based painter whose works acted as a means of processing issues related to Latinx identity, died on Monday at 77. News of Rodríguez’s death was posted to the artist’s Instagram, which said that he had been battling ALS.

Rodríguez’s works spanned formalist abstraction and less easily classifiable forms of painting that enlisted found materials. Whether explicitly or not, these works dealt with racial inequities that he and other artists of color have faced for centuries.

Born in 1945 in Santiago de los Treinta Caballeros, Dominican Republic, Rodríguez was the grand-nephew of Yoryi Morel, a key figure associated with the development of modernism in the country. During his childhood, Rodríguez lived under the dictatorship of Rafael Trujillo, whose regime was responsible for the deaths of thousands, including a number of Haitians, whom the Dominican military violently targeted because he considered them ethnically inferior. The Trujillo regime came to an end in 1961, but even under his successor, Joaquín Balaguer, there was the constant threat of violence, so Rodríguez fled to the U.S. 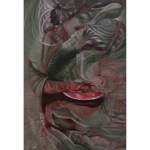 Once he came to New York, Rodríguez attended the Fashion Institute of Technology and the New School for Social Research. He witnessed the shift from Abstract Expressionism to more conceptual modes of painting. Some of his earliest paintings, from the ’70s, were done in response to a mantra often put forward by the artist Frank Stella: “What you see is what you get.”

Rodríguez wanted to take his paintings one step further than Stella’s. “The challenge for me is: behind what you see, there is something else,” Rodríguez once told writer Richard Klin.

What resulted from that inquiry was a series of hard-edged abstractions done in bright colors. Like Stella, Rodríguez made paintings whose compositions were carefully mapped out in advance, unlike the works of Abstract Expressionists, which embraced chance arrangements of paint strokes. Unlike Stella, however, Rodríguez also paid homage to Latin American literature, with titles that alluded to novels by Gabriel Garcia Marquez and others.

During the ’80s and ’90s, Rodríguez brought to the fore his continued interest in racial disparities. He did a series called “Cimarrón,” its name a reference to the word used to describe enslaved Africans who had escaped.

Some works suggested that racism infiltrated all aspects of life, including the art world. In the 1986 painting Atrapado en punzó, he depicts a pair of brown-colored legs atop a calendar. This calendar, one realizes, documents the Museum of Modern Art’s exhibition slate for the year, which includes white artists such as Henri Matisse and Jim Dine at the exclusion of BIPOC ones.

Last year, the Whitney Museum acquired a painting by Rodríguez; the work is now hanging in a show charting interchanges between painting and sculpture between the ’60s and ’80s, and it figures next to pieces by Lynda Benglis and Alma Thomas. The National Gallery of Art in Washington, D.C. also acquired a Rodríguez work last year.

In addition to his paintings, Rodríguez was commissioned to produce a memorial in Rockaway Beach to the victims of Flight 587, which crashed in Queens shortly after takeoff while en route to Santo Domingo. The memorial, Rodríguez told HuffPo, “functions on many levels. In its simplicity, there is spirituality.”