Art Basel’s Paris+ Fair Kicks Off with a Tense PressConference

At a somewhat tense press conference this morning at the Centre Pompidou, the leadership of Paris+—the fair’s director, Clément Delépine; Marc Spiegler, Art Basel’s global director; and Annabelle Ténèze, the curator of the fair’s Sites section—kicked off the new fair, which has its VIP preview tomorrow morning.

The 40-minute conference, which was conducted in French with an English translation that was at times hard to follow, began with remarks by Spiegler, who addressed the arrival of a new Art Basel fair in Paris. After years of claiming that the company wouldn’t add a fourth event to its portfolio, Art Basel “couldn’t miss out on such an opportunity,” Spiegler said. 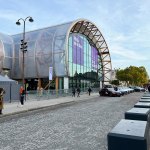 Which Galleries Have Expanded to Paris? A 30-Year Timeline

Paris’s clout in the international art scene has steadily ramped up in recent years, with the arrival of international galleries, new private museums, and vibrant curatorial programs at the city’s museums.

With over 156 exhibitors for the first edition, Spiegler said that Paris+ plans to increase its capacity in 2024 when it officially moves to the Grand Palais, which will reopen in tandem with the Olympic Games in Paris that year. (The first two editions of Paris+ are taking place at the Grand Palais Éphémère, near the Eiffel Tower.) To account for the discussion that several galleries who had long participated in FIAC had been rejected for this edition of Paris+, he noted that the fair had not seen this “level of excitement” since the launch of Art Basel Hong Kong in 2013.

Spiegler added that he hoped the journalists gathered at the conference would help “restore the image of Paris,” a clear reference to the city’s former identity as the center of the art world in the 19th and early 20th centuries, until it was eclipsed by New York in the postwar era.

Delépine prefaced his remarks by noting that the inaugural edition of Paris+ had been “organized in a short time” frame of roughly nine months, but that he hoped to be “deeply rooted and embedded in the fertile ground” of Paris’s art scene and build about the legacy of FIAC, the fair that Paris+ replaced and that has operated since 1974.

After Ténèze previewed the locations and artworks that are part of the Sites programming, like Alicja Kwade at the Place Vendôme, Thaddeus Mosley at the Musée Delacroix, and Niki de Saint Phalle, Raúl de Nieves, and Franz West in the Jardin des Tuileries, the conference turned to questions from the French and international journalists gathered, which is when the tension began.

One journalist brought up the ongoing energy crisis in Europe and the strike that was being staged that day in Paris. There is talk that the action could possibly lead to a general strike. Today’s national strike was primarily limited to the operation of commuter lines and Métro trains. Additionally, around 10 percent of high school teachers were on strike.

To this Spiegler replied that it’s “absolutely normal to be concerned” about situations like this, but spoke optimistically about the “role of art” in times like these.

Another journalist asked what about Paris+ was in fact the “plus,” given that Art Basel and MCH, its parent company, were in the “driver’s seat” and the similarities the fair shares with FIAC. He also made reference to the work Jennifer Flay, the former longtime director of FIAC, had done in building up FIAC’s reputation during her nearly two-decade tenure. (When Flay departed FIAC in February, it was widely speculated that she would be headed to Art Basel’s new Paris fair; the top job for Paris+, however, ultimately went to Delépine.)

“Well, I’m not Jennifer Flay,” Delépine replied, adding that the “plus” is the “experience” of attending this new fair, with the global scope that Art Basel brings with it. Because the fair only had nine months to come together, he continued, this was just the beginning and that it would only deepen its connections with Paris and its arts community before Art Basel’s contract with the Grand Palais expires in seven years.

In a follow-up question, ARTnews asked if members of the press should be forgiving if the fair doesn’t live up to its hype, since Paris+ came together so quickly.

“No, what it means is that the core of the system, if I may say, is truly the modern and contemporary art fair … so if this doesn’t work perfectly, the rest is less of a worry at the moment,” Delépine said, speaking in English. “We really wanted to reinforce the fair and make sure we could propose an art fair that can stand with Art Basel, or any [other fair], and then we’ll focus on stages for the following [editions] of Paris+. So you don’t have to be forgiving, but I count on your comprehension.”

Spiegler, also speaking in English, added, “I would say feel free to be forgiving, but I don’t think when you walk into the fair tomorrow morning, it will feel like a rushed job in any way. As Clément said, certain conversations take longer than others, but this is a fair that I think will feel very strong in every way.”