Jackson Pollock, Mark Rothko, and Willem de Kooning still tend to dominate the conversation about Abstract Expressionism, even though women associated with the movement, like Lee Krasner and Elaine de Kooning, were just as important to it. In recent years, there have been attempts to uphold the contributions of these women, and the latest of them is a show at the Fondation Louis Vuitton in Paris in which Joan Mitchell’s work is put on even footing with the beloved Impressionist master Claude Monet.

It’s a bold move that insists on Mitchell’s centrality, not only to the Abstract Expressionist movement but also to the broader arc of art history. 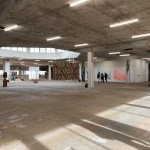 Artists Are Flocking to Paris's Suburbs, Thanks to a Program That Subsidizes Studios in Abandoned Buildings

Which Galleries Have Expanded to Paris? A 30-Year Timeline

In this show, titled “Monet – Mitchell” and curated by Suzanne Pagé, Mitchell’s career is presented chronologically, beginning with her early abstract works from the 1950s. Born in Chicago in 1925, Mitchell was exposed to art early and attended art classes at the Art Institute, where she went on to receive her M.F.A. By the time she moved to New York in 1947, her work had already began to take an abstract turn after she closely studied Cubism and Impressionism, and she found herself at home in the New York School of the 1950s. During this time, she made especially close ties with the de Kooning’s and the poet Frank O’Hara, who frequently went to Mitchell’s studio to write.

In 1951, she appeared in the seminal “Ninth Street Show,” in which Jackson Pollock, Franz Kline, both de Koonings, Krasner, and other AbEx artists exhibited together. On view at “Monet – Mitchell” are some of her works from the period when that show took place.

By 1957, Mitchell truly hit her stride and was featured in a seminal profile in ARTnews by Irving Sandler “Mitchell Paints a Picture.” In the article, she discusses some of the key aspects of her work, telling Sandler, “I carry my landscapes around with me.” It’s a way of describing the emotional and visual landscapes that melded in her memory, an impression which acts as the seed that eventually blooms into a painting.

Her 1956 work Hemlock is one of the more literal translations of this process. In the painting, Mitchell uses slashes of green in dark and light tones to invoke a graceful hemlock tree. More abstracted but still as potent, Mud Time (1960) is a crush of colors whose edges appear to fade into each other. The painting suggests a springtime cityscape that’s been splashed with mud following heavy rain.

It’s this way of approaching landscapes that ties together Mitchell and Monet, who are united by the methods they used to recreate nature.

It is stunning to see works like Monet’s Nymphéas (1917–19) and Mitchell’s River (1987) side by side. Monet may be representing a pond and Mitchell may be depicting a river, but these are similar in the ways they allow water to dissolve into blocks of white interrupted by thin cuts of color. Seeing their works side by side is a revelation.

In particular, Mitchell loved how Monet used purple. She paid homage to that in Edrita Fried (1981), a triptych that relies on the same blues and purples that Monet employed to depict the watery depths of his water lilies.

Yet Monet and Mitchell are not only stylistically similar—they even worked in the same place.Mitchell eventually settled in France on a property that is just a stone’s throw from Monet’s residency in Giverny. Mitchell had begun keeping a studio in France in the mid-1950s and found the slower pace of the country essential to the development of her work.

In 1955, Mitchell said of her move to Paris, “I think it would be easier to live the life of a painter here. The continual working and not showing for years—it’s accepted and has a dignity.”

The exhibition ends with the presentation of 10 works from Mitchell’s “La Grand Vallée,” a 21-painting cycle that Mitchell made between 1983 and 1984. It is the largest gathering of this series since it was first exhibited in 1984.

The works were inspired by a childhood memory of Gisèle Barreau, a friend of Mitchell’s. The landscape Barreau described was a place that she and her cousin used to visit and play in as children. Her cousin had expressed a desire to return there shortly before his death.

The paintings are quite large, and most take the form of diptychs or triptychs. Yellows and blues, colors that Mitchell seemed to especially use to communicate grief, collide; a rolling thicket of brush and flower is suggested. Inspired by Barreau and the recent death of her own sister, Mitchell created a series of paintings that attempt to imagine a landscape of the afterlife.