RAGE AGAINST THE MACHINE.Have you had enough of AI-generated art? Well, so have some artists.Business Insidertook a deep dive into the case of artists whoclaim that their work is being copiedby AI image generators. “I feel like something’s happening that I can’t control,” said artistGreg Rutkowski. He’s not alone.IGNreports thatAT, a popular artist on Twitch, recently went viral after some on Twitter noted that a user namedMusaishhhadcopied AT’s work, with plans to rework it using the platform Novel AI. According toIGN, “Musaishh has since deactivated their Twitter account after receiving backlash from social media users and artists alike.” 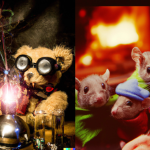 DECLINING BUSINESS.Several of Australia and New Zealand’s banks are in the process of selling off large chunks of their sizable art collections.Bloomberginvestigated theunusual situation, and reported that the Melbourne-basedConstruction and Building Unions Superannuation Fundis the latest such group to auction off art. Headed to sale are 300 pieces, including ones by Australian artists likeEmily KngwarreyeandMargaret Preston. The trend, some say, is indicative of the effects wrought by Australia’s crackdown on pension funds. “The market,” saidCharles Ninow, director of the Auckland-basedWebb’s Auction House, “is going through something that’s quite amazing.”

Workers at theTacoma Art Museumin Washington have announced plans to unionize. Leadership at the museum hasn’t said yet whether it will voluntarily recognize the potential union.[The Seattle Times]

Collecting coupleRonaldandJune Shelp, who amassed a significant collection of self-taught art, are set to sell their 5,000-square-foot New York duplex for around $6.25 million.[Bloomberg]

Erin Thompson, an art historian who organized a show of Guantánamo inmates’ art several years ago, said it was “shamefully cruel” that the U.S. government continues to own the art detainees produce there. Several former prisoners and one currently held there have called on PresidentJoe Bidento reverse that policy.[Artnet News]

The researcherJanelle Shanehad the AI generatorDALL-Echurn out images of Halloween candy, and the results are not the kind of thing you’d want while trick-or-treating.[CNET]

TO PROTECT AND SERVE.How difficult is it to keep a painting from having soup thrown at it? Very, according to the museum-security expertSteve Keller, who told theAtlantic’sCaroline Mimbs Nycethat institutions would have to seriously up their game in order to, say, prevent a climate activist fromhurling the contents of a Heinz canat a van Gogh painting. “They’ll have to have guards who actually intervene, or other methods, like searching parcels when people bring them into the building to make sure that there’s nothing in there that could damage the art,” Keller said. For now, it’s on visitors themselves to not bring soup into museums.[The Atlantic]