The wall foundations of the main villa, in addition to a pillar from the partially intact hypocaust, or Roman central heating system, was excavated by the Kent Archaeological Society with volunteers from the local community. The hypocaust system would have been used to circulate heat through the walls and floors of an adjacent bath house. 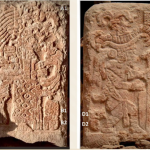 Ancient Mosaics Unearthed at the Tomb of St. Nicholas, Inspiration of Santa Claus

“There are many villas spread across Kent, but the fact there’s a hypocaust system remaining is rare. Operating a hypocaust was expensive, requiring a constant supply of fuels – firewood – and a workforce to operate it,” site director Richard Taylor told local publication KentOnline.

The presence of this kind of system suggests that the inhabitants would have been high-status farmers, as a hypocaust is typically limited to wealthy villas and public villas.

After dating these objects, the team estimates that the villa dates to the 3rd or 4th century C.E.; these Roman-British farmers, however, would not have been the first residents in the area. The nearby site Coldrum Long Barrow dates to roughly 3900 B.C.E., indicating that the land was likely being farmer for thousands of years prior to the villa’s construction.

“This suggests a continuity of settlement in the area that goes back c.5000 years, which is not surprising given its idyllic location and agricultural potential,” Taylor continued. “The villa is like just one episode in a much greater time frame.”