A Mysterious Partially Submerged Structure in Ireland is a Prehistoric Tomb, New ResearchFinds

The tomb-like Carraig á Mhaistin stone structure, uncovered in Ireland’s Cork Harbour years ago, is now believed to be a megalithic dolmen. Previously, experts have been unsure whether it was prehistoric or a 19th-century “folly.”

New research conducted by archaeologist Michael Gibbons indicated that the monument is in fact a megalithic dolmen. A small chamber on the west side of an unknown cairn, a man-made stone stack marking a burial mound, measures 82 feet long by 15 feet wide. The cairn was previously concealed due to rising sea levels. 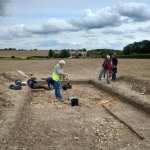 This is significant, as portal and court tombs “occasionally have intact long cairns which are both intended to provide structural support to the chamber itself, and to enhance visual presence in the landscape”, Gibbons told the Irish Examiner.

He believes that the cairn could extend well below the surface, “partially entombed in estuarine mud”.

It is unclear exactly when sea levels in the area rose, but they are believed to have been stable for the last 2,000 years.

There is only one other intertidal portal tomb on the island, and the Carraig á Mhaistin dolmen is one of three intertidal tombs in the country.

Among Irish folklore, portal tombs or dolmens were often known as Diarmuid and Gráinne’s bed—a final resting place for the fugitive couple who were pursued by Gráinne’s husband Fionn mac Cumhaill.

Many of these structures were built close to the coast; however, due to movement in the Atlantic ocean, many have not survived, including Sherkin Island’s sole megalithic tomb on Slievemore townland.

The Carraig á Mhaistin has not been previously included in the state’s survey of megalithic tombs in Ireland, conducted Ruaidhrí de Valera and Seán Ó Nualláin more than forty years ago, due to doubt surrounding its age.