Climate Activist Attempts to Glue Head to ‘Girl With a PearlEarring’

An activist wearing a Just Stop Oil shirt apparently attempted to glue his shaven head to the famous painting Girl With a Pearl Earring by Johannes Vermeer, while another activist poured soup over him and then glued his own hand to the wall next to the painting, according to a video posted to Twitter Thursday.

The painting, which hangs in the Mauritshuis museum in The Hague, Netherlands, is the latest to be targeted by climate activists. Earlier this month, activists threw tomato soup at Vincent van Gogh’s Sunflowers at the UK’s National Gallery, and, a few days later, activists threw mashed potatoes at Claude Monet’s Meules at a museum in Germany. 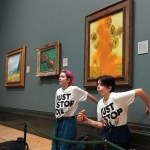 Climate change protests that involve gluing or throwing liquids at paintings began in late June, with most actions committed by the UK climate activism group Just Stop Oil, with other activist organizations in Germany and Italy joining in.

There is no information yet as to whether or not the painting has been damaged. However, none of the works targeted in these protests have been damaged so far; destruction has not been activists’ stated intentions.

“This is not about negating the beauty of art but a way of saying that our priorities are absolutely fucked right now. There are people wandering around these art galleries finding beauty inherent in art that depicts nature, and yet are unable to comprehend the beauty that is disappearing with our ancient forests, or the hundreds of species that are going extinct each day.”