A Roman watchtower was uncovered by a team of Polish and Moroccan archaeologists in Morocco earlier this month. Until this discovery, it was unclear whether towers of this kind existed in this area.

The tower was found at the site of El Mellali near the ancient city Volubilis, along the southern border of the ancient Roman province. It was constructed about four miles south of the largest city in this region of Roman Africa, according to a statement from the Embassy of the Republic of Poland in Morocco.

“On the basis of satellite images, we selected several sites that have a common feature: an oval plan with a rectangle or a square inscribed in it,” Maciej Czapski, an archaeologist and Ph.D. student from the University of Warsaw and a member of the Polish-Moroccan research group, told Heritage Daily. “We chose this particular site because it is located farthest to the south. There could be a place associated with the presence of the Roman army.“ 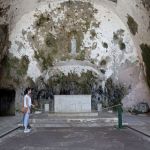 The foundations and walls of the tower were uncovered during the excavations. Within the structure were the remnants of an internal staircase and cobblestone fragments that once surrounded the fortification.

Military artifacts—including javelins, nails from Roman sandals, and belt fragments—were also discovered at the structure. Using them, the archaeologists were able to date the structure to sometime between the 1st century CE and 3rd century CE. They said they believe the structure was in use during the reign of Antoninus Pius, who ruled as Roman Emperor from 138–161 CE.

Altogether, the findings confirm the presence of a Roman army at El Mellali—a breakthrough in the study of defense systems in the valley. While scholars had previously believed that such fortifications existed, this is the first time that such a site has been excavated.

“The foundations of the Roman defense tower are a magnificent testimony to the Roman defense system around Volubilis, thanks to the excellent cooperation between Polish and Moroccan archaeologists,” said Krzysztof Karwowski, the Polish ambassador to Morocco, in a press release.

Under a cooperation agreement between the University of Warsaw and the Institute of Archeology and Cultural Heritage (INSAP) in Rabat, work on the site has been ongoing since 2021 under the direction of Aomar Akerraz and Radoslaw Karasiewicz-Szczypiorski.

The Kingdom of Mauretania, which emerged after the fall of Carthage at the end of the third Punic War in 146 B.C.E., stretched from central present-day Algeria westward to the Atlantic, thereby covering what is currently northern Morocco and southward to the Atlas Mountains. Mauretania ultimately became a client state of the Roman Republic.

Under Juba II, a client-King of Rome, Volubilis developed into a city with Roman-influenced art and architecture. Volubilis became a center of commerce when Emperor Claudius annexed Mauretania and established the Roman provinces of Mauretania, Tingitana, and Mauretania Caesariensis. It exported such commodities as grain, olive oil, and wild animals for public entertainment. By the end of the 2nd century C.E., Volubilis had a population of approximately 20,000.