In response to the recent death of Mahsa Amini, a group of anonymous artists staged a protest at the Guggenheim Museum in New York on Saturday in the hope of moving institutions like to make statements about her.

Last month, Amini died in a Tehran hospital after being detained, allegedly for not complying with Iran’s national hijab standards. Her family has said that, while in custody, she was beaten by the police.

Her death caused uproar in Tehran and neighboring cities, sparking a mass protest movement that moved through European and U.S cities like Berlin, Washington, D.C., and Los Angeles. 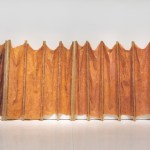 From the top floor of the Guggenheim’s rotunda, the artist collective, which goes by the title Anonymous Artists for Iran,unfurled 12 red banners reading “Women, Life, Freedom” and depicting Amini’s portrait.

In a statement first published by Hyperallergic the New York City-based collective described the Guggenheim protest “a call for action to support the current revolution in Iran.”

A spokesperson for the Guggenheim did not immediately respond to ARTnews’s request for comment.

Figures like Iranian artist Shirin Neshat have spoken out against Western responses to Amini’s killing. This weekend, Neshat publicized a video of demonstrators at the Guggenheim. In the post, the filmmaker and photographer described the demonstrators as “the conscience of the sleepy art world who cares little for Iranian women fighting for basic human rights and freedom.”

Earlier this month, anonymous protestors transformed fountains across culturally important sites in the Iranian capital by dying the water red to make them appear as though they were filling with blood.