After some German politicians decried his views on the pro-Palestine Boycott, Divestment, Sanctions movement, curator Bonaventure Soh Bejeng Ndikung became the subject of controversy this week.

Ndikung, who is set to start next year as director of Berlin’s Haus der Kulturen der Welt museum, quickly spoke out against allegations that he was anti-Israel, telling the German press agency dpa that he did not and does not support BDS. After he did so, Claudia Roth, Germany’s culture minister, rose to Ndikung’s defense, saying that he should be “judged primarily on his artistic achievement.” 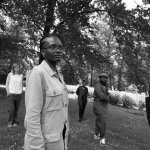 BDS’s stated aim is to place economic and political restrictions on Israel in order to pressure the country to grant Palestinians equality. Within Germany, it has been particularly polarizing. Artists and curators who are perceived to have even indirect ties to it have weathered intense criticism and occasionally even threats of violence.

The latest edition of Documenta, the esteemed recurring art show in Kassel, became entangled in the ongoing scrutiny when its curator, the Indonesian collective ruangrupa, was accused of exhibiting an anti-Israel bias. For the show’s detractors, that bias was coupled with antisemitic leanings. Even before the show opened this past summer, ruangrupa faced heated claims that it supported BDS because it included a Palestinian collective named the Question of Funding.

When a work by the Indonesian group Taring Padi that featured antisemitic imagery was quickly removed, the allegations deepened, and other groups whose works took up the Palestinian struggle were placed under the microscope. While the show successfully completed its run, the events of Documenta 15 have continued to haunt ruangrupa, whose guest professorship at a Hamburg university has been met with protests.

Even before Documenta 15, however, allegations of support for BDS had proven potentially damaging for artists. In 2019, the city of Aachen attempted to pull an award given to the photographer Walid Raad after the local government claimed he was in favor of the movement.

In the case of Ndikung, the claims rest largely on a 2014 Facebook post in which addressed an Israeli attack on a Gaza school that left 15 dead. “They will pay a million fold for every drop of blood in GAZA! Palestine shall be free… come rain or shine!” he wrote.

The post was surfaced this week by the German publication Westdeutsche Allgemeine Zeitung, which quoted several Jewish politicians speaking out against Ndikung. One was Felix Klein, Germany’s antisemitism commissioner, who claimed that Ndikung had ideas that “must be clearly viewed as hostile to Israel.”

Ndikung denied this, pointing out to dpa that he is supporter of the Initiative GG 5.3 Weltoffenheit, a resolution by German cultural leaders that explicitly rejects BDS while also noting that politicians’ attempts to ban the group are “dangerous” and that “accusations of antisemitism are being misused.”

He specifically addressed the Facebook post, telling the press agency, “Despite the pain I felt, I wouldn’t write it like that today. But I can’t erase the past. Part of my work as director of HKW will be to fight against any form of misanthropy and to stand up for solidarity.”

Ndikung is expected to start at the HKW in January. He was artistic director of the most recent edition of Sonsbeek, a Dutch art festival, which he and his curatorial team recently departed, claiming racism, sexism, and “unsupportive conditions.”