Frances Morris will depart from her post as Tate Modern’s director at the end of April 2023.

Over the course of the last two decades, she served in various role at the London museum, as head of displays and as director of the its international art collection. In 2016, she was appointed as director at Tate Modern, becoming the first women to lead the museum.

Morris began her tenure at Tate as a curator in 1987, following a stint at Arnolfini gallery in Bristol. She holds degrees from Cambridge and the Courtauld Institute of Art, and has served in advisory roles on various museum groups in the U.K. 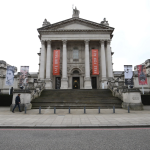 “Over three and a half decades later I feel privileged to have been nurtured by an institution that has transformed itself from within,” Morris said in a statement to ARTnews. “And to have contributed to an extraordinary period of growth in the contemporary art scene in the UK and across the world.”

Prior to her promotion in 2016, Morris played a crucial role in the Tate’s efforts to globalize its collection, helping to acquire more work by artists hailing from the Asia Pacific region and the Middle East.

She has also been essential in the museum’s addressing gender disparities, organizing surveys and retrospectives for women like Louise Bourgeois, Yayoi Kusama, and Agnes Martin.

“As audiences flood back into the museum, this feels like a good moment to go out on a high,” she said.

A spokesperson for the museum did not confirm if the museum is currently seeking Morris’s replacement.

In a statement, Maria Balshaw, the Tate’s chair and director, called Frances “pivotal” to the museum.

“From championing women artists to expanding the international scope of our collection, and from realising Tate Modern’s radical opening displays in 2000,” Balshaw said. “Her contribution to the organization’s trajectory over the past 35 years is immeasurable.”