The Hirshhorn Museum and Sculpture Garden in Washington, D.C., has tapped Selldorf Architects and Skidmore, Owings & Merrill for a historic modernization of the interior of its Gordon Bunshaft–designed main building and plaza. This will be the largest renovation of the museum in its history, with upgraded galleries and public spaces among the planned additions.

Work isexpected to begin in 2025 and could keep the museum closed for two years.

“Art making has changed dramatically since our opening in 1974, and the Hirshhorn’s annual attendance has increased 40% in the past five years,” museum directorMelissa Chiusaid in a statement, “In response to these developments, the revitalization of our museum campus prepares us for the 21st century.” 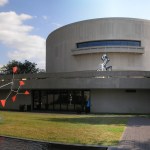 Hirshhorn officials toldthe Washington Postthat the plan is still in early stages—a budget, for example, is still forthcoming—however better sustainability, increased accessibility, and updated infrastructure, including fine art storage, are among the team’s priorities. The architectural team also aims to expand the exhibition space to accommodate a larger audience and more “ambitious” museum program, according to a press release.

The announcement comes during a transformational period for the museum, which recently finished replacing the concrete exterior and roof of the landmark Brutalist-style building.This will be the final phase of the three-phase upgrade which began with upgrades to the façade and follows with the Hiroshi Sugimoto-led redesign of the Sculpture Garden, which is set to break ground in November. Work on the garden is expected to last between 18 and 24 months.

Designed in 1960s and opened in 1974, the donut-shaped museum was decried by critics during the midcentury but herald today as an architectural innovation. Art lovers nationwide have nervously followed thesuccessiveplannedrenovations in fear they will undercut the building’s idiosyncrasy. Last December, the$60-million revitalization of the sunken sculpture gardenwas approved, ending a heated two-year debate between preservationists and the art institution.