An Overlooked Oil Sketch in the Netherlands Has Been Attributed toRembrandt

An oil sketch that has languished in obscurity at a Dutch museum for more than a century is now believed to be a true Rembrandt.

The Bredius museum in the Hague, which has owned the work for over 100 years, previously believed the sketch to be the work of one of Rembrandt’s followers. On Thursday, it revealed that experts have attributed it to the Dutch master himself, accordingthe Guardian.

The Raising of the Cross was executed in the 1640s and was brought to the museum by Abraham Bredius, the museum’s original curator. Bredius was confident that the picture was a true Rembrandt, but for years the sketch was shrugged off as a copy by experts who cited the work’s lack of refinement and precision. 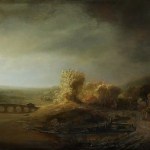 A Contested Landscape Painting in Berlin Is Deemed an Authentic Rembrandt

“I looked at this work again and again. At the brush strokes. They are brilliant,” Jeroen Giltaij, former chief curator of old paintings at Rotterdam’s Boijmans Van Beuningen museum, toldAgence France-Presse. “Just a few broad brush strokes” had him convinced the picture was the work of the famous Dutchman.

Giltaij made the “discovery” while working on his Big Book of Rembrandt Paintings, which covers all 684 works known to have been made by the painter. Johanneke Verhave, an art restorer based in Rotterdam, confirmed Giltaij’s theory after performing infrared reflectography and X-ray scans on the work.

Experts may have previously considered the work crude, but Verhave said her research “shows that the sketch has several changes made by the artist himself while painting, meaning that its composition was a creative process. This means the painter was changing his mind while he was working. He was clearly not copying another painting.”

“You have to remember, this is an oil sketch. Rembrandt is usually very precise and refined, but this is very rough,” Giltaij toldthe Guardian.“The reason is the oil sketch is a preparatory sketch for another painting. He wants to show the composition, a rough idea of what the actual painting could look like.”