Two men who in 2019 defaced the White River Narrows, a petroglyph amphitheater with the largest concentrations of prehistoric rock art in Nevada, were sentenced to prison last week. Their actions violated the Archeological Resources Protection Act, a U.S, statute that advocates penalties for the vandalism or looting of archaeological sites on public land.

Listed among the National Register of Historic Places, the White River Narrows is best known for its winding rhyolite canyons and vast petroglyph galleries spread across some 4,000 acres just a couple hours north of Las Vegas. 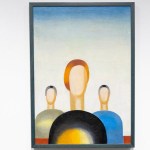 Mona Lisa Smeared with Cake by Climate Change Protester: 'Think of the Planet'

The petroglyphs date back to between roughly 4,000 years ago and the 19th century. They depict highly stylized renderings of animals and people, as well as abstract designs, such as spirals and waves.

“No restitution or repair can undo the damage done by those who would vandalize such a sacred and historical site as the White River Narrows, but this ruling demonstrates that such crimes will not be met with a slap on the wrist,” Jason M. Frierson, the U.S. attorney for the district of Nevada, said in a statement.

“Our office will continue to work to ensure that anyone who desecrates sacred tribal lands and artifacts are held accountable,” the judge continued.

Both men were sentenced on November 4. The case was investigated by the Bureau of Land Management, which sought to make examples of the perpetrators, as legal penalties for the vandalism of prehistoric sites have not often been enforced.

After pleading guilty earlier this year in June to a misdemeanor conspiracy charge and a felony violation, Jonathon Pavon was sentenced to a year and one day in prison. Pavon spray painted a roughly 20-foot-long tag of his name “Cluer” onto a rock panel.

Daniel Plata was sentenced to 4 months in prison and 8 months in at-home confinement for painting smaller tags of his name “Velor” throughout the site.