The growing trend of climate activism and famous paintings came this week to the Vancouver Art Gallery this week, where two protesters splashed an Emily Carr painting with maple syrup and glued their hands to the wall. The protestors sought to draw attention to the climate crisis and demand an end to the construction of the Coastal GasLink Pipeline.

In videos, protestors Erin Fletcher and Emily Kelsall identified themselves as members of a group called Stop Fracking Around. They expressed frustration over a lack of action on the part of the British Columbia government to slow fossil fuel emissions that are worsening the climate crisis. 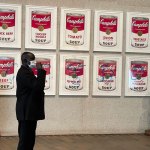 Are Museums Good Venues for Climate Protests? Four Directors Discuss the 'Worth of Wokeness'

On Monday, the Vancouver Art Gallery issued a statement condemning the incident, calling it an “act of vandalism”, and noting that staff believed there would be no permanent damage to the painting.

Anthony Kiendl, director and CEO of the museum said, “The Vancouver Art Gallery condemns acts of vandalism towards the works of cultural significance in our care, or in any museum. A central part of our mission is to make safer spaces for communication and ideas. As a non-profit charity, we are an institution of memory and care for future generations.We do support the free expression of ideas, but not at the expense of suppressing the ideas and artistic expressions of others, or otherwise inhibiting people from access to those ideas.”

The Gallery’s own audio about the 1934 painting Stumps and Sky said it can be interpreted as Carr’s “lament over the commercialization of the old growth forest.”

Coastal Gaslink, the company behind the pipeline targeted in the protest, said it received all necessary permits and approvals for construction of the pipeline. However, the 416-mile route is on unceded lands of the Wet’suwet’en First Nation, whose members have repeatedly tried to evict pipeline employees, contractors, and their equipment from the area.

Climate activists have vandalized famous artworks in several countries around the world to protest the ongoing extraction of fossil fuels, at a pace frequent enough that arrests andsentencinghave become more common.

Vancouver Police told CBC News that no arrests has been made in connection with the Emily Carr protest, but they were investigating the incident.