Climate activists in Vienna took to the Leopold Museum, where they splashed oil on a treasured Gustav Klimt painting. The work itself was not damaged.

The gesture is one of a string of recent ones intended to push governments across the world to take quicker action to combat the effects of climate change. Past actions have seen tomato soup hurled at a van Gogh in London, mashed potatoes tossed at a Monet in Germany, and maple syrup spilled on an Emily Carr in Vancouver.

The action on Tuesday was done by Letzte Generation, the Germany-based group that also conducted the Monet action. 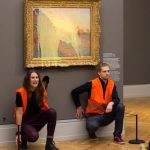 Letzte Generation activists targeted Death and Life (1910/11), one of a number of Klimt masterpieces that regularly draw tourists to the Leopold Museum. In video documenting the event, one activist appears to spill the black oil out from a sac while another glues himself to the piece. A security guard then appears to intercept the action and start to haul one of the activists away.

“New oil and gas drilling is a death sentence to humanity,” Letzte Generation wrote on Twitter.

In a statement, Leopold Museum director Hans-Peter Wipplinger said, “The concerns of climate activists such as those of the ‘Letzte Generation’ are valid, but attacking artworks is definitely the wrong way to prevent the intended goal of preventing the projected climate collapse.”

At similar protests, the works involved have undergone minimal damage or none at all. The activists involved, from groups such as the U.K.-based Just Stop Oil, have been clear that they are not seeking to harm the artworks in the process.

The Leopold Museum said that there had been “evident and significant” damage to the glass atop the painting, the surrounding frame, and the nearby wall and floor.

Asked if any arrests had made, a museum spokesperson told ARTnews, “Police checked the personal data of the activists.As far as I know the activists are still at large.”

Museums directors across the globe have fiercely decried protests such as this one, citing the “fragility” of the artworks being targeted. Institutions have also begun initiating heightened security measures in the hopes of stopping these actions before they happen.