AND THAT’S A WRAP.The last big New York evening sales of the week were held last night atChristie’s, where auctions devoted to 20th and 21st century artbrought in $421 million, Daniel Cassady reports inARTnews. Both auctions suffered from “cautious buyers, and a form of auction overkill, which caused many lots to sell for hammer prices that hovered comfortably around their low estimates,” he writes. Yet the sales still managed to bring records forNoah Davis,Rashid Johnson, andNjideka Akunyili Crosby, and the auctions did manage to bring a certain level of intrigue when works byWillem de KooningandJean-Michel Basquiatunderperformed. Even though there are day sales still remaining, Christie’s has brought in well over $2 billion in the past two weeks alone. 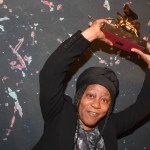 O CANADA.The Winnipeg-based artistDivya Mehrais thewinnerof the Sobey Art Award, Canada’s top art prize, the CBC reports. Among Mehra’s most attention-grabbing projects was one that, in 2020, saw theMacKenzie Art Galleryin Regina return a sculpture to India that her research revealed as having been looted. She will now take home CAD$100,000 (USD$75,000). In theGlobe and Mail, scholarCharlie Wall-Andrewsbemoaned thestate of Canadian arts organizations, writing, “Diversity may be one of Canada’s best qualities, but it’s not one the Canadian arts can take credit for.” And inArt in America,Charlene K. LaureviewedtheArt Gallery of Ontario’s retrospective forDenyse Thomasos, whose work was a standout in editions of theToronto Biennial of Artand theWhitney Biennialearlier this year.

Certain members ofHilma af Klint’s family are not pleased with anew NFT initiativefeaturing her work thatPharrell Williamsplayed a part in creating. The family members say that the NFTs go against what her work stood for.[The Art Newspaper]

Anselm Kiefergot the profile treatment and talked about his cross-country, two-partGagosianshow. “I put the contemporary together with the depths of history,” he said.[The New York Times]

ArtistThomas McKeanhas been using MetroCards in his art for years. But as more and more people go digital to pay subway fare, his practice may now be in trouble.[The New York Times]

It’s almost time forArt Basel Miami Beach, and that means that companies around the city are beefing up their security with the aim of being able to host celebrities.[The Daily Beast]

Zoé Samudzihad some harsh words for the travelingPhilip Gustonretrospective, which “created a one-dimensional portrait of Guston as a mere recorder of violence rather than someone who recognized the multidimensionality of his victimization and complicity,” she writes.[Jewish Currents]

GO TO HELL.No, seriously, you could, in a way, if you visit Singapore’sHaw Par Villa, which is home to an entire museum devoted to the 10 Courts of Hell.CNNventured inside the institution, which is meant to allow visitors to explorewhat happens after deathaccording to Buddhist lore. Although the museum is filled with memorable visions of punishment and forms of violence, kids can be found there, enjoying what’s on offer. The Haw Par Villa doesn’t exclusively focus on hell, however, but according to some, it’s all some people come there for.Jeya Ayadurai, the historian who helped envision the museum last year, said, “Every time you spoke about Haw Par Villa, people just wanted to talk about the 10 Courts.”