On Wednesday evening in between two contemporary art evening sales, a painting by Andy Warhol from his famed 1963 “Death and Disasters” series sold for $85 million at Sotheby’s New York. The result makes it one of the most expensive works by the Pop artist ever to be sold at auction.

[Who was Andy Warhol, and why is he important?] 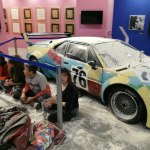 Measuring 30-feet-high and featuring 19 black and white pictures of a fatal car crash, White Disaster (White Car Crash 19 Times), was estimated to fetch a price a price in excess of $80 million during the sale. (Backed by pre-sale financing, the work was offered this evening with an irrevocable bid.)

Two bidders on the phone with Gregoire Billaut, the house’s head of contemporary art in New York, and David Schrader, head of private sales, competed for the massive silk-screened painting. Despite the high price and this sale being the fourth-most expensive work by Warhol to ever sell at auction, the environment in the salesroom Wednesday evening was rather muted. Bidding, which lasted under two minutes, opened at $66 million and then quickly jumped to $70 million, before staggering to the final hammer of $74 million. There was mild applause from Sotheby’s staff after its sale.

The last time a painting from “Death and Disasters” series, which features appropriated images of car accidents, riots, and suicides, came up in a public sale was in 2013, when Silver Car Crash (Double Disaster) sold for $105.4 million, setting a record for the artist at the time. That record was re-set earlier this year, when a portrait of Marilyn Monroe sold for $195 million.

The White Disaster painting once passed through the hands of dealer and collector Heiner Friedrich, who cofounded the Dia Art Foundation. The last time it was sold at auction was in 1987, when it went for $660,000, and it has been held in a private collection for more than three decades.