On Wednesday night in New York, Sotheby’s brought in a combined $319.4 million (with fees) from two back-to-back evening sales of contemporary art, including the third iteration of its “Now” evening sale, which also saw several new auction records.

On offer were works that spanned from rising market darlings like Lucy Bull and Anna Weyant alongside pieces by figures with established blue-chip markets like Willem de Kooning and Francis Bacon. Of the 60 lots for sale, 49 sold for a sell-through rate of 82 percent. Two lots, including a painting by Joan Mitchell, were withdrawn in advance. 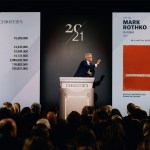 As with most auctions, a significant portion carried financial arrangements made in advance of the sale to ensure their sale: 26 lots in the auctions were backed with pre-sale financial guarantees, while 24 of them were secured with irrevocable bids.

The total hammer price for the entire grouping before fees came to $276.9 million, falling toward the lower end of its pre-sale estimate of $268 million–$343.8 million, which is calculated without fees. The result surpassed the equivalent sale total of $233 million achieved last November, when Sotheby’s first debuted its Now evening sale, which dedicated to art made since 2000.

Sotheby’s first tested the model last fall to capitalize on the bullish demand for young artists; the result saw the sale also spurring momentum for their more established peers. New records were set Wednesday for a number of artists, including Barbara Kruger, Jacqueline Humphries, Carol Bove, Betye Saar, Elizabeth Peyton, and Salman Toor. Looking on was a packed auction room that drew a range of power players, from auction regulars, like dealers Brett Gorvy and David Nahmad, to newcomers like television producer Ryan Murphy.

The Now sale, the evening’s first sale, also saw success for artists who have previously exceeded expectations at auction. Nearly 70 percent of the offerings also went for prices in excess of their high estimates. Bidding from Asia propelled much of that action, spanning nearly half of the sale’s 22 lots.

This sale’s top lot was Yoshitomo Nara’s Light Haze Days / Study (1993), a painting featuring one of the artist’s signature doe-eyed girls. This painting had appeared in the artist’s traveling retrospective that opened at the Los Angeles County Museum of Art last year. The painting hammered at $10.1 million, within its $9 million to $12 million estimate; the final price of $11.9 million (with premium) will be paid by a bidder on the phone with Sotheby’s Taiwan director Wendy Lin. That price, however, is a far cry from the artist’s auction record of $25 million set at Sotheby’s Hong Kong in 2019.

Interest in work by painter Salman Toor has only increased since the artist’s first major institutional survey in the U.S. at the Whitney Museum in 2020. The painting that was used to advertise that exhibition, Four Friends (2019), was on offer at Sotheby’s Wednesday night. The work, a painting of four figures lounging together under green-fluorescent lighting, was listed in the exhibition catalogue as belonging to Christie Zhou. The second lot of the evening, it set the sale on a strong foot as it attracted five bidders. It sold to a bidder on the phone with Sotheby’s London-based private sales director Fergus Duff for $1.6 million (with premium), a new record for a painting by Toor. The sum is more than three times its pre-sale estimate of $300,000.

Women artists working in figuration also exceeded expectations. Elizabeth Peyton’s portrait of a sleeping acquaintance and Christina Quarles’s canvas featuring mangled bodies were among those that notched new artist records. Peyton’s work Nick with His Eyes Shut (2003) sold for $2.5 million with buyer’s fee’s, while Quarles’s Bits n Pieces (2019) went for $1.6 million with fees. Both paintings hammered above their respective estimates of $1 million and $600,000.

On the heels of a new record set Tuesday evening at Phillips, another work by painter Maria Berrio, who often portrays women hovering in florid scenes, sold for above its estimate: Three Harbingers (2020) hammered at $920,000, three times its low estimate. It went to a bidder on the phone with Sotheby’s Asia chairman Patti Wong for a final price of $1.2 million.

“There’s a lot of pressure on the market right now,” Sotheby’s New York chairman Brooke Lampley told ARTnews following the sales. The results were a welcomed surprise following tepid auction performances earlier in the week, including for Sotheby’s modern art sale on Monday. “The truth is there’s a huge supply of great works coming to the market at the same time,” she added. “Finding unique buyers for everything is a challenge.”

Sotheby’s London-based auctioneer Oliver Barker wrapped the house’s series of fall auctions with the second portion of the night: a contemporary art sale beset by a tone more subdued than the night’s earlier portion of ultra-recent art.

The auction’s cover lot, the most expensive of the grouping, was Andy Warhol’s 1963 canvas White Disaster (White Car Crash 19 Times), measuring at 30-feet-high and featuring 19 black and white image of a gruesome car accident. The picture, deriving from one of Warhol’s best known series titled “Death and Disasters,” was estimated to fetch a price in excess of $80 million during the sale. Offered with an irrevocable bid, the lot attracted only two bids with Sotheby’s New York specialists hammering at $74 million and bringing the final price to $85 million with fees. Despite the high price—the fourth highest for the artist at auction—the star lot’s sale failed to drum up the same fervor in the room as its younger counterparts earlier in the night.

[Who was Andy Warhol, and why was he important?]

A focus of the night was on three paintings by Willem de Kooning. Each of them, vibrant abstractions the painter produced between the 1970s and ’80s, were sold by the artist’s family members. Together the three works sold for a collective $58.1 million, meeting their cumulative expectation.

Francis Bacon’s Three Studies for Portrait of Lucian Freud (1964), a work depicting the painting’s titular British artist in three haunting renditions, headed into Wednesday night’s auction after being held in a private European collection for a decade. It failed to attract enough bids to bring it to its $30 million estimate, hammering at $28 million. With premium, though, the final price tag was $30 million.

But for another long-established artist, a new record came swiftly in Barbara Kruger’s 1984 work Untitled (My face is your fortune), featuring her signature appropriated black-and-white photographs overlaid with cryptic phrases. Sotheby’s New York head of private sales David Schrader won the work for his phone bidder. It hammered at $1.25 million, going for a final price of $1.6 million, against an estimate of $600,000. The result outpaced the previous record for Kruger set at Christie’s last November.