RISING STARSdominated at last night’sPhillipsauctionof modern and contemporary art in New York,Angelica VillaandDaniel Cassadyreport inARTnews. AMaría Berríopainting went for more than double its estimate, selling for $1.6 million with fees, and aLucy Bullabstraction tripled its low estimate, going for a total of $478,000. Still, the $138.9 million sale just barely managed to meet expectations. Even its top lot, aCy Twomblyabstraction that was bought for $36 million, only rose slightly above its low estimate.“The market feels more tentative,” New York collectorMax DolcigertoldARTnewsfollowing the auction. Whether that sense of apprehensiveness will be felt tonight atSotheby’s, where two contemporary art sales are taking place, remains an open question. 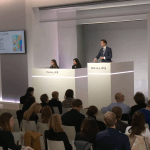 ART AWARD ALERT.The future ofArtPrize, once one of the biggest art awards in the U.S., appears to be uncertain.MLivereports that the prize’sboard has disbanded. Why this is happening now remains unclear, although ArtPrize has promised that it will continue to live on in some form. ArtistRinko Kawauchihaswonthe Outstanding Contribution to Photography Prize from the Sony World Photography Awards, per theNational. More than 20 of her works are now on view in a related exhibition atSomerset Housein London. And the city of Miami has announced that it isplanning to offer$35,000 in prize money to participants in its No Vacancy, Miami Beach initiative, which will place 12 artworks in a dozen hotels in the area.

Anonymous Was a Woman, an organization that offers grants to women-identifying artists over 40, has named its 2022 winners. Among them areMary Lovelace O’Neal,Abigail DeVille, andJaune Quick-to-See Smith.[ARTnews]

After a lengthy negotiation with real estate developers, the German state and the Berlin government have bought back the building that hosts theHamburger Bahnhofmuseum and the adjacent Rieckhallen. The deal cost a reported $176.1 million.[Artnet News]

Workers at theStorm King Art Centerin Upstate New York have revealed plans to unionize. So far, the art center has not said it would voluntarily recognize a union.[The Art Newspaper]

Russia’s Parliament is currently displaying art byViktor Bout, a prisoner being held in the U.S. whom Russia is hoping to exchange for the basketball playerBrittney Griner. Bout was convicted of terrorism for allegedly trying to sell up to $20 million in weapons.[ABC News]

Giuliano Ruffini, a dealer accused of having forged dozens of Old Masters paintings, cannot be found by French police, who put a warrant out for his arrest. Investigators are not even sure whether he is still in Italy.[The Art Newspaper]

POTTY HUMOR.In a vibrant interview with theNew York Times, the composerBrian Enodiscussed a famous story about how he once peed on aMarcel Duchampreadymade composed of a urinal turned on its side. If you were sitting there, wondering how he managed to do it, now you have an answer. Here it is: “I went to a plumber’s near theMuseum of Modern Artand I found some fine plastic tube that I knew I could get through it. I used that and a pipette. I went to the toilet and peed in the sink—God, they’d hate to know this. I pipetted it up, covered the end so it held the golden liquid in there, and then stood by the vitrine and was feeding the pipe through. I mean, it was symbolic in a way because it was a tiny amount of pee.”[The New York Times]