Banksy appeared to encourage his fans on Instagram to steal items from a Guess clothing store, alleging the company used his images without permission.

“They’ve helped myself to my artwork without asking, how can it be wrong for you to do the same to their clothes?” the famous graffiti artist wrote to his 11.5 million followers in a post Friday on the social media platform.

The photo Banksy posted was of the window display of a Guess store on Regent Street in London showcasing several items from a capsule collection with the word “Brandalised” and featuring several Banksy graffiti images. 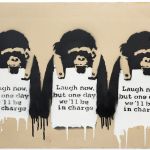 Banksy Comes Out On Top in EU Trademark Challenge, Allowing Him To Stay Anonymous

The artworks referenced include “Flower Thrower”, “Queen Ziggy”, the “Living the Dream” Mickey billboard in Los Angeles, the “Thug for Life Bunny”, and “Flying Balloon Girl”.

The clothing company’s official announcement for the capsule collection used the word “inspired” and said the items were produced in partnership with Brandalised, an urban graffiti license “whose mission is to offer Banksy fans affordable graffiti collectibles.” The clothing and accessories are priced between €40 to €270 ($41 to $278 USD).

“The graffiti of Bansky has had a phenomenal influence that resonates throughout popular culture,” Guess Chief Creative Officer Paul Marciano said in the press release. “This new capsule collection with Brandalised is a way for fashion to show its gratitude.”

After Banksy posted the message on Instagram, the BBC reported that Guess closed the store, put security outside, and covered the window display.

ARTnews reached out to Guess for comment, but did not receive a response at press time.