Auction of Pre-Columbian Artifacts Begins in Paris Despite Pressure fromMexico

The Mexican government is attempting to halt a French auction from selling more than 60pre-Columbian archaeological objects, bidding for which began today.

In a statement, the Mexico’s National Institute of Anthropology and History (INAH) urged the sellers to “reflect on the ethical codes around the commercialization of looted cultural assets that contribute to cultural dispossession.”

The INAH called on the Parisian auction houseGiquello & Associésto“take into consideration the historical, symbolic and cultural value of the assets, which are superior to any commercial interest,” including ceramic sculptures from the Olmec people, one of the earliest Mesoamerican civilizations. Mexican officials have also cited a 1934 law in the country which prohibits the export of Mexican objects of archeological importance. The legislation, however, is not applicable outside of Mexico, leaving the fate of the artifacts in the hands of the auctioneers. 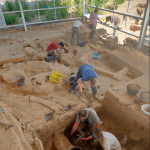 Over 2,000-Year-Old Celtic Coins Worth Millions Stolen from German Museum in Under Ten Minutes

He added, “Absolutely every item presented in [the auction] are perfectly respectful of the treaties, regulations and terms, and with the French law.”

Bidding is now open on 82 artifacts, from pottery to sculptural artworks, many of which are in exceptional condition. Among the lots is a Mayan ceramic seated female figure, a carved Olmec bowel, and an Incan vase in the shape of a man’s head.

Mexico has been increasingly active in pursuing the restiution of its looted artifacts from around the world. Officials in the country have launched a movement known as #MiPatrimonioNoSeVende (#MyHeritageIsNotForSale),and it’s become common for the Mexican Ministry of Culture to directly call out auction houses hosting such sales. The results of their efforts have been mixed.

In March, the agency said it had identified more than 100 objects that were set to be sold in auctions in the following weeks at various auction houses, including Setdart in Barcelona, Carlo Bonte in Bruges, and Ader in Paris, as well as at the Vienna-based Galerie Zacke in Vienna.Only the Viennese gallery returned the cultural property in its possession, a representation of the Aztec earth god Tlaltecuhtli from Veracruz.