Christie’s raked in $421.9 million (with fees) on Thursday night with the third iteration of its back-to-back 20thand 21stcentury evening sales in New York.

The sales, which brought a whopping total of 104 works to the auction block, were a source of considerable anticipation to the collective art world after a Christie’s auction last week dedicated to works from Microsoft cofounderPaul G. Allen’s collectionfetched a collective $1.5 billion with fees. When the sales that followed packed a significantly weaker punch, many looked to the 20/21 sales for the the true state of the art market. 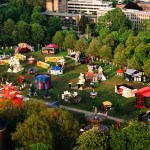 Bidding from both the phones and the floor was animated during the 20thcentury sale, and even more so during the 21stcentury sale that followed. But both sales appeared to suffer from the same affliction: cautious buyers, and a form of auction overkill, which caused many lots to sell for hammer prices that hovered comfortably around their low estimates. Even so, they reached a 93 percent sell-through rate, an admirable figure considering the sheer volume of art on sale during the November auctions.

The sale did have its moments. Works by Eva Gonzalès, Paul Sérusier, and Émile Bernard set artists’ records during the first sale as did five artists in the 21stcentury sale, including Noah Davis, Rashid Johnson, and Njideka Akunyili Crosby. Eight works sold for $10 million. With three sales left to go at Christie’s, these last two weeks have already sold an eyebrow-raising $2 billion worth of art.

The 20th century sale kicked off with a brio that is hard to sustain over 69 lots. A haunting brown and blue Howardena Pindell canvas,Untitled(1971), started off the evening and quickly hammered at $850,000 after ten bids, well above the $500,000 low estimate.

A few lots later,Beatrice Hastings (devant une porte), 1915, an elegant painting by Amedeo Modigliani, hammered at $15 million on an estimate of $12 million–$18 million.

The Modigliani was followed by an equally sophisticated image of a woman’s face, a print of Man Ray’s 1926 photograph of Kiki de Montparnasse, her head laying prone on a table, eyes closed, and holding an African mask in her hand. The picture hammered for $3.3 million, just over $4 million with fees, which makes it the third-most expensive photograph to sell at auction. The other two — another Man Ray and an Edward Steichen — were also sold by Christie’s this year.

During the first sale, there were two disappointments: Pablo Picasso’s muscularBuffalo Bill(1914), a Cubist powerhouse that runs hot with Americana mystique, drew in just a handful of bids and just made it over the low estimate, hammering for $10.5 million ($12.4 million with fees). More painful still, Willem de Kooning’sUntitled III(around 1978) failed to sell. After a mere minute on the block, it became clear the painting wouldn’t get close to the estimated $35 million price tag and the auctioneer declared it a “pass.” There were at least three audible gasps and one very prominent “Oh wow” from the bidding floor.

“When there are this many works on offer, and there have been quite a few de Koonings this season, anything less than an A-plus just won’t do,” art dealer Nicholas Maclean told ARTnews of the failed sale. When asked to clarify, he pointed to the subtle blurring of the colors in the de Kooning on offer and said that some find that a sign of a lesser work, but not by much.

“I would give it an A-minus,” Maclean said, “but the difference between an A-plus and an A-minus can be $20 million … sometimes a great deal more.”

Arguably the most exciting point of the first sale came when two floor bidders, the ASOM Collection director Ekareeina Klim and art advisor Gabi Palmieri, outbid each other multiple times for Morris Louis’sFloral V(1950–60). The bidding started at $2.2 million and, within seconds, the two women were the only bidders left — Klim in the center of the room and Palmieri on the left. After each bid, one would look at the other, then whisper into their earbuds, while others on the bidding floor turned to watch the encounter. Klim won out with a bid of $4.6 million, for a total of $5.58 million, just above the high estimate.

Around halfway through the sale, some collectors left, complaining about the length and breadth of the sale. One collector on his way out could be heard saying, “I’m just not interested anymore, it’s gone on too long. I’ll come back for the second half, but this is too much.”

Roughly half of the 20thcentury sale came with a guarantee. And, with 96 percent sold by lot, the sale brought in a total of slightly under $308 million with fees.

Those who returned were glad they did as the 21st century portion of the evening was explosive and, at only 40 lots, mercifully quicker. The first five lots saw rapid-fire bidding from Christie’s specialists on the phones, online, and the auction floor. During those lots, the records for both Rashid Johnson and Noah Davis were set.

Johnson and Davis followed, and the pace showed little sign of slowing. Johnson’sSurrender Painting Sunshine(2022) soared past its $800,000 estimate, hammering for $2.45 million (an even $3 million with fees). Meanwhile, Davis’sCongo #7(2014) hit its high estimate dead on when it hammered for $1.2 million ($1.5 million with fees). But, as is true of all things, a breakneck pace doesn’t last forever. After the fifth lot, Anna Weyant’sLoose Screw,also hammered at $1.2 million, some of the heat in the room died down.

The auction house really put the painting front and center. At the start of the second half, instead of the gentle music that lured collectors into their seats during the 20thcentury sale, a raucous, energetic video took over the walls behind the rostrum while the lights in the room dimmed. A drummer in silhouette, surround by darkness, played with maniacal precision. A flash of light and then a boxer appeared, bobbing and weaving and shuffling his feet. Another flash of light, and the drummer appeared again, the tempo increasing. A voice boomed in the darkness, “Power is an icon.” But the energy did not hold to the bidding. Estimated to bring in around $35 million, the painting saw only two bids and hammered at $28.2 million for a total of $32.4 million. Still, it was by far the highest price for a picture throughout the entire night.

Right behind Basquiat was Jeff Koons’ booze-filled, stainless steel trainJim Beam – J.B. Turner Train(1986) which hammered at $14.5 million for a total of $16.99 million.

The second half of the sale brought in a total of $114 million on 35 lots with a sell through rate of 89 percent.

Johanna Flaum, Christie’s international director and head of postwar and contemporary art, told ARTnews that this was the largest season the art market has ever seen with over $3 billion in art sold in just two weeks.

“It’s truly extraordinary. Of all everything that has been sold in the last few weeks, Christie’s has sold two thirds of that art. It’s truly an achievement,” Flaum said.

It certainly is. But with so many lots selling on the lower side of the estimate, it seems that collectors are playing it a bit closer to the vest than earlier this year, or in previous seasons. Whether that will continue into 2023, is anyone’s guess.