Ten artists have dropped from König Galerie’s roster since allegations of sexual misconduct against its founder, Johann König, were reported by Die Zeit in late August.

One of those artists, Monica Bonvicini, publicly split with the gallery early this month. Bonvicini initially “paused” her representation amid the allegations. Then, less than a month later, König, which is based in Berlin, announced that her relationship with the gallery was terminated.

Since the Die Zeit article’s publication, Trey Abdella, Elmgreen & Dragset, Katharina Grosse, Friedrich Kunath, Basim Magdy, Helen Marten, Amalia Pica, Jeremy Shaw, and Corinne Wasmuht have dropped from the König roster. Outlets such as Artnet News and the Art Newspaper first reported the news of many of these departures. Those artists have not spoken out about why their representation ended or when, making it unclear whether the end of their respective relationships with König was connected to the allegations against him. 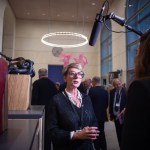 U.S. Edition of Dealer Johann König's Memoir Is on Hold After Reports of Sexual Harassment Allegations

The initial Die Zeit report included allegations by multiple women, some of whom were not named. König fiercely denied the accusations and successfully lobbied a Hamburg court to have portions of the article altered.

The Berliner Zeitung report also claimed that it was misleading to state that the writers approached König personally during their investigation, when Würfel allegedly did not. A Die Zeit spokesperson told Berliner Zeitung that Würfel was “involved in some, but not all, of the research interviews as a freelancer.” The other two reporters did meet with König.

Friedrich Kunath has also been removed from the roster, although a representative told Artnet that the end of his representation came before the Die Zeit report was published.

A representative for König Galerie said, “The gallery does not comment on artists leaving and never did in its 20 years’ history.”