Curator and educator Deborah Swallow will be stepping down from her position as the Märit Rausing director of The Courtauld Institute of Art in London after 18 years, the Institute announced in a statement.

“It has been a huge honour to serve The Courtauld as the Märit Rausing Director and to play a part in shaping this unique organisation’s development,” Swallow said in the statement. “I have been challenged, inspired and energised by my Courtauld colleagues, by our students and alumni and by colleagues across the university.”

The Courtauld Institute is a highly prestigious school which operates autonomously from the University of London in which it is housed. The Institute is highly focused on the history of art and art conservation, and is known for producing a disproportionate amount of alums that go onto be museum directors at major institutions around the world. Swallow’s departure from her role as director opens up a highly coveted position in the world of art academia. 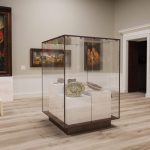 In the last years of her tenure Swallow oversaw a $72 million redevelopment project named Courtauld Connect, which the statement referred to as “the most significant development in The Courtauld’s history.” The project is focused on renovating and expanding Somerset House, where the Institute is housed.

“This monumental achievement is testament to Deborah’s unwavering belief in the power of art, its centrality to the human condition and the importance of preserving it for the future,” Lord Browne of Madingley, Chair of The Courtauld’s Governing Board, said of the Courtauld Connects project in a statement.

The Courtauld Connects project is not without its critics, however. Lecturers employed by the Courtauld protested the institution’s investment in infrastructure over the needs of their teaching staff, reported The Art Newspaper.

Swallow was also instrumental in forging important relationships between the Courtauld and such major institutions as the Getty, the State Hermitage Museum, the Mehrangarh Museum Trust in Jodhpur Rajasthan and the King’s College London.

Swallow will continue in her position as director until her replacement is found.