Immersive exhibits have been raking in money as shows dedicated to Van Gogh, Leonardo da Vinci, Egon Schiele, and Gustav Klimt tour the world. In the case of Van Gogh and Da Vinci at least, organizations are taking advantage of public domain to convert these masters’ paintings into color and light.

TeamLab has found enormous success in a different kind of immersive show that creates peaceful, colorful environments; it opened a museum in Tokyo in 2018, while also producing for artistic institutions like Pace Gallery and multinational conglomerates like Disney. In the first year of opening the teamLab museum, the collective brought in $50 million from more than 2 million visitors. 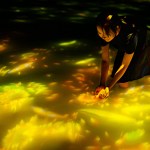 According to teamLabs’ initial complaint from 2019, teamLab accused MODS of copying two shows they had produced—Universe of Water Particles, Transcending Boundaries (2017) that was shown at Pace Gallery in London and Crystal Universe (2015)—to create MODS shows, Season Dream and Galaxy Dream respectively. MODS was founded in 2018. TeamLab also accused MODS of using images of teamLab shows to promote MODS on social media.

Aside from taking down MODS exhibitions and promotional photos, teamLab is seeking damages for revenue lost. While it can be difficult to judge how many visitors may have skipped a teamLab show thanks to MODS, the loss of license fees alone are potentially significant.

“teamLab routinely receives license fees in the range of one million to several million dollars for six-month licensing periods in connection with exhibitions of its works,” read the 2019 complaint, meaning that at the very least MODS might have to pay up for fees in the millions.

In a response filed by MODS earlier this April, the company’s representation pushed back on several points. MODS claims that since teamLab does not have copyright registrations in the United States, they cannot sue. (It should be noted that both the US and Japan are signatories to the Universal Copyright Convention, so it’s not likely teamLab would have to file a copyright registration in the US for their copyright to be valid.)

MODS’ other point questioned what exactly has even been copied.

“Crucially, TL [teamLab] lacks clear and complete evidence of what exactly is included in the allegedly infringed,” reads MODS’ response. “The elements of the exhibits that TL claims Defendants copied are either not original to TL, not protectable, or both. These elements are defined broadly and vaguely, and cover a multitude of ideas and materials found in earlier installation artworks.”

In the complaints, teamLab alleges that MODS’s exhibitions were “substantially similar in total concept and feel.”

MODS’ response points out that using hanging LEDs that change color is a “medium of artistic expression used by many artists,” employed by such artists as Yayoi Kusama.

Both parties petitioned for summary judgment earlier this month and a hearing is scheduled for June. If the court does not render a judgment and MODS and teamLab don’t agree to a settlement, a trial would commence in August.

If the suit goes to trial, the court’s decision could have important implications for the art world, as teamLab’s suit and MODS’ response call into question what, if anything, about an immersive installation is legally copyrightable.