Paintings by George Morrison have been made into USPS Forever Stamps in recognition of his influence on the American art scene. Morrison will be joining the likes of Andy Warhol, Andrew Wyeth, Ruth Asawa, and other influential artists who have been honored with these stamps.

“He would have been delighted, just ecstatic that he was chosen for this because he was a big fan of stamps—he liked collecting them,” said Morrison’s son, Briand, in an interview with ARTnews. “He would save the stamps he got when people sent him letters.”

The Chippewa artist was born in 1919 on a reservation in Grand Portage, Minnesota. As a child, he spent months in a full body cast recovering from a surgery. It was during this period of convalescence that he began to draw. 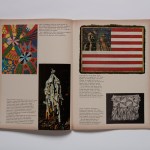 From the Archives: 23 Contemporary Indian Artists

The experience would lead him to go to art school at what is now called the Minneapolis College of Art and Design before moving to New York City. Morrison traveled to France for a period after receiving a Fulbright scholarship, but he soon returned to chase the Abstract Expressionist movement that was blooming in New York.

“My father was part of that scene in the 1950s,” said Briand. “He was friends with Jackson Pollack and William de Kooning, they hung out at the Five Spot Bar in Greenwich Village. He was in the thick of it.”

Inspired by Abstract Expressionism, Morrison made landscapes formed from big blocks of painted color or from pieced-together scraps of driftwood that he collected on the shores of Cape Cod.

For years, Morrison’s work went under-recognized. That all changed in 2014, when the Heard Museum in Phoenix staged the first full-scale retrospective ever devoted to him.

According to the USPS, Morrison believed that his work wasn’t seen widely in the earlier phases of his career because he did not adhere to stereotypes of what “Indian” art should look like.

Eventually, in 1968 Morrison won the grand prize at the Fourth Invitational Exhibition of Indian Arts and Crafts in Washington, D.C. Soon after winning the award, Morrison moved back to his home state to teach studio art and Native American studies at the University of Minnesota, where he became more interested in exploring his Chippewa identity. Morrison died in 2000, but his influence is still strongly felt in his community.

“It just makes people feel good when someone from our community is recognized for their work—it’s a confidence boost,” said Brian. “It’s a tight community and we struggle and have a certain bond so it’s nice to feel proud of one of our own.”