The long-embattled San Francisco Art Institute (SFAI), one of the country’s oldest and most important art schools, has received a $200,000 grant from the Mellon Foundation in order to preserve its historic fresco painting by Mexican muralist Diego Rivera that city officials recently designated a landmark.

The funds will support a multiphase effort to conserve the 1931 mural,The Making of a Fresco Showing the Building of a City, which depicts laborers completing a wall painting. It occupies the north wall of a gallery named for the artist on SFAI’s campus. As part of the grant, SFAI will also create public programming and scholarship, and digitize archival material related to the work. 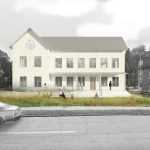 “The Diego Rivera mural occupies an essential and profoundly meaningful place in the culture and history of SFAI and San Francisco,” SFAI board chair Lonnie Graham said in a statement, adding that the grant will allow the school to “elevate how we share the mural with the public by expanding cultural discourse and creating a broadly inclusive platform for social and academic collaboration.”

News of the grant follows a period of tumult at the school, which celebrated its 150th anniversary last year. In April 2020, the school announced that it would likely shutter, as the pandemic had heightened its financial troubles amid declining enrollment, and its plan to merge with another Bay Area university had stalled. But after public outcry, SFAI did allow students to resume courses for the fall semester.

Still, the school was cash-strapped and its main building was foreclosed, and the school reportedly eyed selling the Rivera mural, estimated to be worth $50 million, in order to settle a $19.7 million debt. Following outcry among historians, staff, and former students, the mural was given landmark status by the San Francisco Board of Supervisors, prohibiting the school from parting with it.

Earlier this year, SFAI announced that it had been in discussions to merge with the University of San Francisco.

Zoya Kocur, an art historian who has previously developed educational programming for the Whitney Museum and the New Museum, has been hired to lead the project. Part of the funds will establish an advisory committee to oversee the project, and Kocur said she hopes to tap a wide array of specialists, from Latinx scholars to museum and nonprofit professionals, as well as artists and government partners, to serve on the committee.

Calling the Rivera mural a “crown jewel,” Kocur said in a statement, “I’m honored to serve SFAI and truly excited to be leading an effort that will provide critical resources for conservation and archiving of the fresco and related materials.”