Amid an ongoing investigation, authorities have uncovered an artwork by Diego Rivera along with other luxury items at a residence belonging to Oleg Deripaska, a Russian oligarch who was sanctioned in 2018.

Bloombergfirst reported the news on Monday, saying that U.S. authorities have alleged that Deripaska is evading the country’s sanctions. He is said to be a target of an international task force established last month to go after wealthy Russians with ties to Russian President Vladimir Putin’s administration.

Deripaska is being pursued by the U.S. amid allegations of money laundering for Putin. Deripaska has a current net worth of $3 billion, according to Forbes. 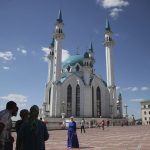 UNESCO Postpones Event in Russia Amid Calls to Divest from Partnership

A representative for the billionaire has denied that Deripaska was the owner of the residence where the Rivera and other items were seized.

Deripaska, an aluminum magnate who founded the Moscow-based metals company Rusal, was first sanctioned by the United States in 2018, among other Russian businessmen, in the aftermath of Russia’s annexation of the Crimean peninsula in 2014. In March, a three-judge panel for U.S. Court of Appeals for the District of Columbia Circuit rejected a suit brought by Deripaska to lift the sanctions.

The Rivera work, details for which have not been released by authorities, is not the only artwork to be recovered from the magnate’s holdings. Other assets that were seized during raids from Deripaska in October 2021 include residences in Washington, D.C, and New York. Around half a dozen works of fine art were recovered during those property seizures in each U.S. city, according to Bloomberg, but the Rivera is the only one to be identified so far.

Pressure on key Russian business figures is mounting as international authorities ramp up efforts to quell their economic influence amid Russia’s war in Ukraine. Last month, the U.S. Treasury Department said it will target “high-value” and “luxury” assets owned by blacklisted Russians with links to President Vladimir Putin.

Bankers, energy barons, and politicians are among those subject to investigation by the task force. Those likely to be targeted include various art collectors already sanctioned bythe U.S., the U.K., and the E.U., including Roman Abramovich, Mikhail Fridman, Alisher Usmanov, and members of the Rotenberg family.