A German group dedicated to Jewish causes has criticized how Documenta, the famed quinquennial in Kassel, responded to allegations of anti-Semitism raised earlier this year.

Documenta first came under scrutiny in January, when the German group Alliance Against Anti-Semitism Kassel accused the quinquennial of “involvement of anti-Israeli activists” in this year’s edition, which is curated by the Indonesian collective ruangrupa. Documenta has vehemently denied the allegations of anti-Semitism, some of which were picked up by major German publications.

In response to the controversy, Documenta said it would organize an events series at which it would address anti-Semitism, Islamophobia, and racism. Titled “We need to talk!,” the series’ stated aim is to focus on “zeroing in on the blank spots in the German debate surrounding antisemitism and racism.” Its first event is set for May 8. 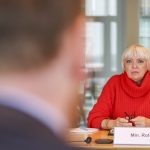 Documenta Responds to Allegations of 'Anti-Semitic' Connections to BDS Movement

In a letter penned to Germany’s culture minister Claudia Roth, Josef Schuster, president of the Central Council of Jews in Germany, accused Documenta’s event of having “a clear bias against anti-Semitism” with the event. The German press agency dpa first reported news of the letter.

According to dpa, Schuster’s letter centered around an event planned for May 22, which focuses on “anti-Muslim and anti-Palestinian racism,” according to its description. “Only clear commitments and much more, decisive political action at every level of politics, art, culture and society help against anti-Semitism,” Schuster wrote. “No one may acquit themselves of this responsibility—not even in the name of artistic freedom.”

A representative for Documenta told ARTnews that it does not plan to make changes to “We need to talk!” following the criticism, saying the forum also plans to address the “origins of sweeping and at times racist attacks on the artistic team of documenta fifteen.”

“Antisemitism is the explicit topic of two of our three events,” the Documenta spokesperson said. “The panelists, including those from Israel, were chosen on the basis of their academic expertise and reflect a broad spectrum of opinions as is evidenced by their published work. As should be the case for such an event, they are all united in their commitment to combating antisemitism.”

“The series of events will focus on the differences and overlaps between anti-Semitism and racism,” the Documenta statement continued. “The question of whether postcolonial theory fails to recognize the specificity of anti-Semitism will also be explored.”