This past January, artist Alicia Eggert erected a neon-sign reading “Our Bodies” outside of the Supreme Court in Washington, D.C.. Inspired by Cuban artist Tania Bruguera’s 2019 call to “make art for the not yet and the yet to come,” the work proved prescient.

On Monday night, Politicopublished a leaked draft Supreme Court majority opinion indicating that it was likely to overturn Roe v. Wade, the landmark 1973 ruling which established a constitutional right to abortion. If the decision remains unchanged when it is released in June, the 98-page opinion, confirmed as authentic by Chief Justice John Roberts, would allow state legislatures to rollback access to legal abortion or ban it entirely, unraveling five decades of legal precedent. 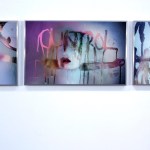 Artist and Activist Marilyn Minter on Roe Leak: This Is 'What Minority Rule Looks Like'

'Abortion Is Normal' Organizers Hope To Stage A New Show In Response To Supreme Court's Ruling on Roe v. Wade

The news has drawn ire among activists, artists and cultural leaders that have long advocated for reproductive rights in their work. Among them are artists such as Barbara Kruger, Nan Goldin, Nancy Buchanan, and Laurie Simmons, alongside curators like Legacy Russell and Jasmine Wahi, who have feared the outcome looming.

“The striking down of Roe should come as a surprise to no one. And if it does, they haven’t been paying attention,” artist Barbara Kruger told ARTnews in an email.

Kruger’s work, known for its bold graphics that indict advertising tactics, has become a symbol for feminist activists. One such work, the artist’s black and white collage Your Body Is a Battleground (1989), is an image she originally produced for a women’s march in Washington in 1989, in support of abortion rights. It has since become a staple at feminist and queer protests, and in December 2020, she offered Polish protesters a chance to circulate reproductions of the 30-year-old text-based collage to oppose restrictive abortion laws passed in the country.In the U.S., she sees moderate and left-wing lawmakers as culpable in the shift, saying they “seldom address the issues of reproductive freedom with candor and power.”

“Their failure of imagination has led us to this moment,” Kruger said.

A ‘painful and shocking’ decision for a generation of women artists

The leaked draft opinion has revived criticisms from pundits that the U.S. is sliding into minoritarian rule, a concern that has also been raised by many in the art world, including the artist-run activist group Guerilla Girls, which has pressured museums to address gender-based discrimination since the mid-1980s.

“SCOTUS is now ECOTUS—The Extreme Court of the United States,” a spokesperson for Guerrilla Girls told ARTnews in an email, adding that “77% of Americans think Roe should be upheld.”

Jenny Holzer, whose large-scale text-based works that have long long appeared in public spaces to challenge displays of power, echoed the sentiment. “A handful of ideologues have no right to jeopardize women’s safety and well-being,” she wrote in an email to ARTnews.

Other forerunners, like Goldin, Buchanan, and Simmons, recalled the days when abortion was not yet legal. Buchanan, a performance artist from California with activist leanings, became involved in the L.A. Woman’s Building during the 1970s, a standard bearer of the feminist art scene in Southern California. She expressed outrage at the Court’s prospective decision.

“It’s extra painful and shocking for my generation,” said Laurie Simmons, whose work in film and photography uses dolls and toy caricatures to deal with gender roles. “We’ve been fighting the fight for so long. We remember the before times which weren’t pretty. The pushback is going to be fierce.”

Goldin, who is known for her pioneering diaristic photography style, has for the last several years been tapped into activist circles. She recently led an effort to pressure the Met to divest from the Sacklers, who founded Purdue Pharma, the maker of Oxycontin, which has been blamed for exacerbating the U.S.’s opioid crisis. For Goldin, whose art and activism has focused on vulnerabilities of the body, the latest news is urgent.

“The idea that a woman can not only be robbed of her control over her body, but that her body can be criminalized when she exerts control is itself criminal,” Goldin said. “This is the scariest indication of what America is regressing to.”

Younger leaders in the museum sphere are emphasizing intersectional issues in response to the possible overturn of Roe v. Wade. Jasmine Wahi, a New York curator who organized the 2020 exhibition “Abortion is Normal,” took to social media to condemn the drafted position.

“This action by Christ-Facist, hetero White, Cis (mostly) men, has been part of the foundational makeup of this country,” she wrote, adding that the global majority “will be highest risk for devastating consequences as Roe is overturned.”

Legacy Russell, a curator who runs the famed New York art space the Kitchen and the author of the 2020 book Glitch Feminism, told ARTnews, “solidarity of movements is required, through and beyond the arts.”

“Reproductive rights are climate change rights are civil rights are indigenous rights are Black rights are Asian rights are womxn’s rights are LGBTQIA+ rights are Latinx rights are land rights. All are connected,” she said. Just last month, Russell pointed to the glaring inequities still plaguing an art world that favors the ultra-wealthy class during a New York benefit, calling the present climate “a feminist emergency.”

Artists and collectors in other parts of the country where abortion has been out of reach are on high alert. St. Louis–based dealer and collector Susan Barrett, who focuses on works by women and artists of color, has witnessed the city’s plight around the issue. The local Planned Parenthood, the only abortion provider in the conservative state of Missouri, has long been a target for anti-abortion advocates, according to Barrett.

“St. Louis is a liberal city in a conservative state,” she toldARTnews. “We understand what we’re up against.”

Eggert, the Texas-based artist behind the neon OURs sign backed by Planned Parenthood, pointed out that, for most women in Texas, abortion has already been put out of reach.

“The urgency of the matter was already very real,” Eggert toldARTnews, adding that timeliness has been one factor behind her chosen medium. “The reason that I work in signage is because of how quickly and effectively it can grab peoples’ attention. You can’t not see it. You can’t not read it.”

San Francisco–based artist Michele Pred, whose works utilize women’s clothing to highway billboards to address reproductive rights, says she is focused on disseminating information about access to abortion pills at an upcoming show at Nancy Hoffman gallery in New York. “We have to consider every body and all women’s bodies in this country.”

For Eggert, Russell, and many others, the themes that occupy their politically-minded work are invariably linked.

“Our bodies, our future, our abortions—you can’t have one without the other,” Eggert said.